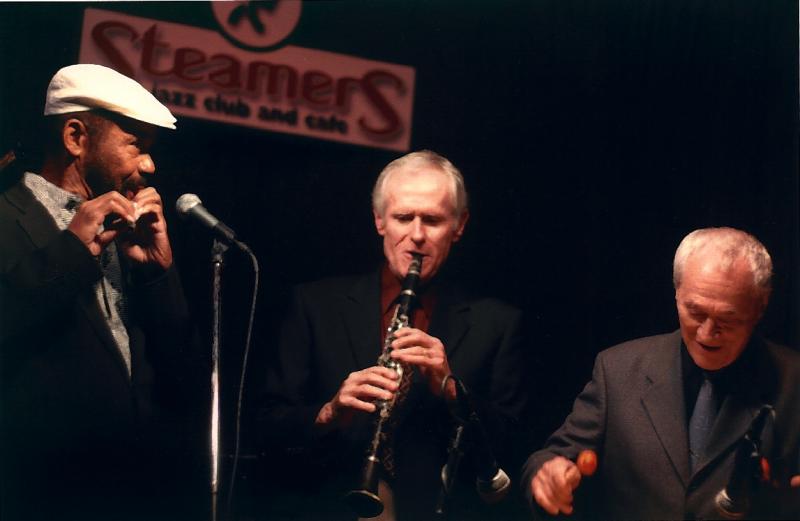 BY MORT WEISS
May 9, 2013
Sign in to view read count
Hello, once again. Still above ground and taking nourishment while most any of my contemporaries who haven't left the building as of yet are listening to smooth jazz, taking their Lithium and writing with crayons. Having shared that thought with you, last month I had my 78th birthday—another strange custom (why do people celebrate one's arriving at a year closer to their death?).

But I digress, having said that, I guess I could be thought of as an elder statesman of jazz (yes, I said statesman). For any of you reading this who would like to know more about me, I strongly suggest that you see the AAJ article, Mort To Come, by the site's very astute and prolific writer, Sammy Stein. This was a "take no prisoners, no holds barred" essay about yours truly, and, doing this work with Sammy, was, in its way, a real catharsis for me and saved me some bucks that I was about to spend on seeing someone.

Sammy not only is a fine writer, teacher and published author, but also a trained musician and vocalist who really knows what's happing in world of the arts (jazz being one of same). Sammy and I butted heads a few times about free jazz and its place within the music—there being very little (if any) structure, a lack of steadfast rules or thematic foundations on which to build one's musical story/message. Sammy was, and is, passionately intent on heralding the interesting and intense messages that free form allows, and the spirituality that can blossom forth from a talented practitioner of the genre—so much so that I was motivated to go to YouTube and hear some of these cats. After doing so, I emailed Sammy about my thoughts regarding the experience. It was conveyed to Sammy in three words: "It's bull shit!" Or, is bullshit one word? Whatever, I think y'all get my point.

Later this month (Wednesday, May 22, 2013), I fly to Los Angeles to record my next album, the working title of which, at this date is A Giant Step Out and Back. The bent of this work will be free-blowing- thoughts-feelings-emotion-laughter-tears of both joy and happiness—and yes, the ever-present feelings of pain and sorrow that are always with us, even with appearance of the clowns; yeah, especially with the clowns. That describes the Giant Step Out part, which will regale over the first 3/4ths of the record. The And Back part of the title will have me doing four well-known jazz covers; no over-dubs, just pure killer presentations. On the first part of the album (this will be a solo clarinet effort) I will use multilayered horn tracks, all spontaneous and done in real time-with a blazing lead track superimposed over all of the under harmonics.

My performance will be virtuosic, doing things that never have been done on the horn, mostly because what I'm going to do is largely impossible to do on the clarinet. I've increased my well-known practicing and physical workouts over the past six months in preparing myself for this jazz history-making event, and people, believe me, this record will always be looked upon as a hallmark of what someone can do if they truly believe in something.

When the record comes out sometime in July of this year you'll see that—looking at any photos that may appear about the CD—when compared to the pictures of me on my last release, I'll Be Seeing You (SMS, 2012) last November, that I look a little different, the reason being that I've lost 15lbs since starting work on this new project. I intended to lose the excess weight and I'm feeling great!

Why am I doing all of this? I'll try to tell you folks: I guess the first and main reason is, because I can. Those of you who know something about Mort Weiss are aware of all the dues that I paid just to be sitting here at my Mac desktop, writing this article. All of you people have also paid a lot of dues. I'm hip to that and I salute you—all of you, especially you 9-to 5-ers that meet, head-on, that daily grind of getting yourselves to the gig, putting up with all the crap that ensues in any workplace and then getting back to your own special place in the universe, your favorite chair, your music, and with whomever and/or whatever you feel blessed.

Well, coming back once more to why am I doing this recording? One of the reasons is that I hear a clock ticking and the regimen that I've imposed on myself can't be kept up much longer. Hey! Every once in awhile I'll look into a mirror, and, damn; I see an old man looking back. I've gotta do this record while the juices are still flowing. Those of you who are familiar with my playing and writing know how important that it is for me to leave some footprints. Ego is not necessarily a pejorative word if used in a kindly forward-moving fashion. And, lastly, maybe I'm doing this album just to impress Sammy, Hell, I don't know; what I do know is that it will be done, and done with every fiber of the life force within me!

OK. Ya know what I've just done? Uh huh, I called my shot, not unlike that great baseball player William Bendix in the 1948 movie The Babe Ruth Story, when he walked up to the plate and pointed his bat (at arm's length) to the faraway centerfield wall, indicating that he would hit a home run (he had promised some kid who was hit by a train or something, that he would hit a homer for him). And in the doing of this, somehow, the kid experienced a miraculous cure, ran out of the hospital and tried to join the Marine Corps—or something like that; whatever, you get the idea.

Point being, it is doubtful if any of you reading this, has ever, ever seen in any media form where a world-class musician has publicly told a prospective audience exactly what and how they would perform and how freakin' great their next, upcoming record will be. Am I right? So be it! Around about next August (possible song title there), some of you will be streaming tracks from my record date on Spotify (where I make 1/10th of one cent) and you'll be saying—or thinking—"Hey, that over confident S.O.B. was freakin' right!"

In the not too distant past, I alluded to the hearing loss that I am experiencing and that the cost of hearing aids was causing me to cancel this recording date. Well, re: the cost, it was and it is, but I'm at the height of my musical powers now, and as I stated a few sentences back, I really can't keep this regimen that I've set for myself going much longer. Let me say it for you (re: my writings): "If there weren't the letter 'I' or the word 'Me,' this guy couldn't write an article." Well I resemble that remark, I'm happy to say.

Let me say it for you: "Hey, Mort, how can you hear a clock ticking if your hearing's so bad?"

This clock, I hear is in my heart.

In closing, let me paraphrase a few words from one whose writings and thoughts have gotten me through some very tough moments, and I quote, "The time of the light's first mention brings upon the thoughtful barometrics of a matrix of finality, e.g. fulfillment and "reciprocity." class="f-right">— Capt. Ethan Z. Cromwell, 2nd Viscount of Farthingham On Rye. 1793- 1994

Until next time, I remain