BY DAVID RICKERT
September 10, 2010
Sign in to view read count 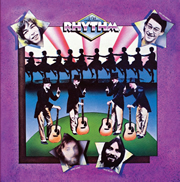 Back in the seventies, a group of acoustic guitar players in England hit upon the ingenious idea of mining the early twentieth century for songs that would make for pleasant finger-style arrangements. Given the heavy syncopation and catchy melodies of the novelty tunes and rags from that era, they figured correctly that such songs would translate seamlessly to the guitar. I Got Rhythm, originally recorded in 1976, features four guitarists playing dazzling arrangements of these songs. A few will be familiar—"I Got Rhythm," "Somewhere Over the Rainbow," and "Ain't Misbehavin,'" among them—but most have been consigned to the dustbin, if not for these eager pickers.

Half of the tracks here are arrangements by Ton Van Bergeyk, a Dutchman who seems more machine than man in the way that he can play finger-busting arrangements at dizzying speeds. Widely hailed by his contemporaries as a true master of his instrument, Van Bergeyk succeeds in making his thickly intricate versions recall complete orchestras. For brave souls or those in need of an eye opener about their abilities to play, his arrangements are included in tablature that comes along with the CD.

The other half of the set is dedicated to guitarists who have completely different styles. Sam Mitchell uses the bottleneck slide to give his two songs an almost surf-like feel; these are two of the most enjoyable tracks on the album in the way they utterly transform the original material into something fresh and contemporary. Through the miracle of overdubbing, John James performs two bouncy songs originally recorded by Annette Hanshaw, by playing both rhythm and lead (he also has a solo piece in here as well.) Dale Miller performs the simplest arrangements, gentle and introspective versions of "Somewhere Over the Rainbow" and "These Foolish Things" that make good use of those wonderful melodies.

I Got Rhythm is another gem unearthed by Stefan Grossman for his Guitar Workshop label. It continues the series of terrific finger-style albums put out by the label.

I Got Rhythm; Under the Moon; Sophisticated Slide; Medley For the Duke: Jubilee Stomp and Take It Easy ; Anno 1926 ; Somewhere Over the Rainbow ; Sugar; The Cat and The Dog; Who's That Knocking At My Door ; Frog-I-More Rag ; Dirty Dozens; Ain't Misbehaving; Stumblin'; Ballin' the Jack; These Foolish Things.