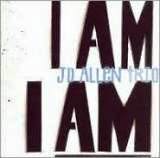 JD Allen can be a powerhouse, hard-driving tenor, but he is also capable of great subtlety and versatility. All three qualities are amply in evidence on I AM I AM, and were also front and center in a performance of his piano-less trio in March, 2008 at New York's Jazz Standard to mark the release of the recording.

Allen has picked his partners wisely. Bassist Gregg August and drummer Rudy Royston are canny interpreters of the ten Allen originals on the CD and complement his tenor voice throughout. Like their leader, they know when to hang back and when to cut loose and they possess talents of their own. August is no run-of-the-mill bassist—at the first of two sets at Jazz Standard he offered a wide range of sounds, soaring impressively in bowed and plucked solos that could seem very personal and idiosyncratic but supported Allen's overall vision. Royston also provided insightful rhythmic support with nuanced cymbal work. Live, in addition to his own boundary-pushing compositions and improvisations, the Detroit-born saxophonist put his stamp on the standard "The Nearness of You" with a soft and mellifluous reading that still maintained his edge (further proving that he is not easy, or willing, to be categorized).

Allen's originals hold up well over repeated hearings. Given the album's title, a listener might assume that Allen is making a statement about who he is and what he's about. But aside from a listing of somewhat enigmatic titles like "Titus," "id" and "Pagan," there is no explanatory information offered about either his biography or his music. But no matter. Allen, who played as a sideman with Betty Carter, Cindy Blackman, Orrin Evans and many others before forming his own groups, doesn't need to explain himself. Just listen.