By Phil DiPietro
November 2, 2005
Sign in to view read count 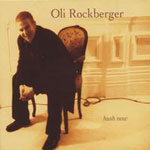 At 25, Oli Rockberger has made short work of the distance from his London birthplace to Boston's Berklee School of Music, where he earned every formal accolade they could hand him.

Like the two most precocious new whiz-kid pianists singing "jazz today, Jamie Cullum and Nellie McKay, Rockberger's pedigree originates across the pond, but that—along with remarkable keyboard and vocal chops—is where similarities end. Rockberger's a jazz, soul, and funk piano man with a heavy melancholy streak expressed through emotive, brawny pipes reminiscent of the most popular rasps of our era: Phil Collins, Peter Gabriel, and Sting. He applies this classic tenor to a repertoire rippling with hip pop and R&B harmonies laced with jazz devices, stylistically closer to a smaller elite group of blue-eyed soulmen including Mick Hucknall or Bobby Caldwell.

That's not where the skills stop, because while Rockberger has "possible pop star" written all over him, this debut could just have easily been a piano trio record, sans vocals. He's formidably gifted in that area, and the most easily comparable slice of pianistic influence evident in these grooves is the Yellowjackets' Russell Ferrante; Rockberger's playing here is similarly steeped in that soulful, gospel, jazzy glow.

Rockberger stands alone for this set on piano, Rhodes, organ, vocals, and pen. Each tune features brilliant bits setting up and stuffed into stellar stanzas, like the letter-perfect organ-as-vocal-over-Rhodes intro that initiates "New Man. Using only that combo on this song, he manages to recall the work of session giant Neil Larsen while stamping his own imprint on a hook a mere fifteen seconds into the tune.

This density of ideas and attention to sonic detail also reveals itself when he unabashedly multi-tracks his own somehow super-slick, yet organically fleshed out vocal harmonies in unexpected places, like the second stanza of the first verse, well in advance of the stratospheric falsetto of the chorus, where it would be too easily expected. Later, he's his own chorus of vortexing backup singers, achieving greater attention to detail by tracking himself than he could ever impart to a roomful of triple-scale sessioneers, pulling the whole amazing thing off effortlessly, all without drawing the ear from the song.

When he wants to take you in another direction, he draws from an arsenal of tools like the prodigious scat soloing, wordless and with the vocal line, sprinkled out from the middle of "Baby I'm Crazy. The stunning Tin Pan Alley tinkle he tosses off on "How Am I Gonna Get There would probably have been nixed by an A&R guy lacking Rockberger's savvy sense of surprise and humor. He follows that with angular, almost out vocal-piano unison elaborations, slipping near abandon until he's done toying with them for half a minute, seamlessly throttling back to more conventional virtuosity.

There's plenty more condensed almost secretly into this concise treasure, including the title tune, which, among a hundred other things, screams "hit single. Unlike McKay and Cullum, there hasn't been a bidding war, yet. Word—I expect my cut.

This CD is available from CDBaby.

Hush Now; Show Me; How Am I Gonna Get There?; Guide Me Home; Make You Mine; Clear and Collected; Baby I'm Crazy; New Man.