By Bruce Lindsay
November 8, 2019
Sign in to view read count 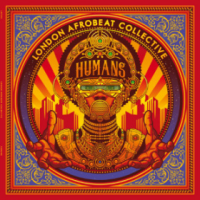 Hard-driving, politically-charged, rhythmic, irresistibly-danceable music; what else could be expected from a band that mixes influences from Fela Kuti, Parliament/Funkadelic, Frank Zappa, and Nile Rogers and Bernard Edwards into one exciting and uplifting musical pot? Such expectations are high, but the London Afrobeat Collective meets them with ease.

There have been a few personnel changes since Food Chain (Self Produced, 2015). Percussionist Zak Cohen has left without being replaced, Giuliano Osella is now on drums and, most noticeably, Juanita Euka has replaced Funke Adeleke on vocals, so the band has pared down slightly to a nine-piece line-up. Euka's voice has a lower range than Adekele's, but it's just as powerful, with a rough edge that gives added force to the anger to be found in many of the lyrics. Euka's vocal power is matched by that of the instrumentalists; this is a mighty band of musicians (and video evidence—see YouTube, below— suggests that the band is a superb live act as well).

The London Afrobeat Collective formed in 2009, so this release celebrates its tenth anniversary. Following the pattern of Food Chain, Humans combines politically forthright, socially aware, lyrics with powerful wall-of-sound music. All of the songs are credited as whole-band compositions and, for the most part, focus on ensemble performances—highlighted particularly on "Prime Resources," "Stop Talking" and "Tolembi" where the horns fly in unison above the punchy rhythm section. There are some strong solos, too. Taken together, this three-pronged attack of voice, ensemble and solos makes Humans one of the best of 2019's releases.

Tolembi; Power To The Women; Prime Resources; Tokomona; Stop Talking; They Come & They Go; All You Need Is Air; Walk Alone.