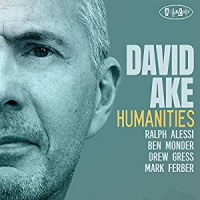 The group that pianist/composer David Ake assembles for Humanities thrives on change and doesn't care all that much for boundaries, familiar stylistic references, or decorum. Distinctions between written material and improvisation, soloists and accompaniment, are subject to transformation, collapse, consolidation and mutation. Nothing stays on exactly the same course for very long. Featuring Ake, Ralph Alessi's trumpet, Ben Monder's guitar, Drew Gress' bass, and the drums and cymbals of Mark Ferber, the band offers a steady diet of shifts in emphasis, large and small, and isn't big on telegraphing its intentions. Ake's witty, resourceful compositions often combine relatively brief, accessible melodies and somewhat durable forms—things for the ear to hang onto, at least for awhile—while the group expands and contracts, taking all manner of liberties while maintaining a modicum of stability.

The title cut, a cover of Jerry Garcia's and Robert Hunter's "Ripple," and "Resource Center" contain some of the group's most relaxed, nuanced interplay. The melody of "Ripple" is shared by all in a continuous loop throughout yet never grows tiresome, in part because there's room for everyone to move about in ways that don't sound too careful or contrived. At one point, Monder's loose, ringing lines turn slightly distorted, initially cutting against the melody before he joins in. Ferber's brushes execute any number of brief, somewhat off kilter fills even while he finds a loose pocket in conjunction with Gress.

"Hoofer" and "Drinking Song" speak to the whimsical quality of Ake's writing, as well as the group's penchant for knocking into one another without breaking the music into pieces. "Hoofer" combines a haunting, repetitious cycle of chords initiated by the composer, a pair of brief themes, and a delightfully lopsided swing feel. Everyone evolves at the same time but not necessarily in the same manner. The track invokes the playful spirit of informal dance as well as a kind of stubborn intensity, particularly during Alessi's solo when Ake's hard, punchy chords work in concert with Ferber's abrupt single strokes and closed rolls.

The band's rousing, crowded, borderline cacophonous side is well represented by "Groundwork," and by "Rabble Rouser," where exchanges between the melody and Ferber's drum breaks bear a resemblance to the work of Ornette Coleman. "Groundwork," a bright, country-tinged theme, initially stated by Gress and then by Monder and Alessi, quickly yields to the ensemble's ragged continuity. The track easily accommodates the sound of Monder's guitar, which waxes distorted and sludgy one moment, chiming and steely the next; the band's transformation from an anxious, leaping momentum to thickset stew that threatens to stretch out beyond all recognition; as well as Ake's pensive solo piano.

Early on in "Walter Cronkite," Humanities' last track, the voice of the venerable broadcast journalist intones a brief statement that sets off shock waves amid the band's agreeable interplay. "I guess the ultimate lesson is that—being a democracy—we the people are responsible for the actions of our leaders." As much as it's tempting to separate the pleasures of the performing arts from the demands of the social and political issues of our nation, in the end, there's no escaping the responsibilities of citizenship in a democratic society. Cronkite's words, placed deep inside of Ake's excellent, inspired recording, imply that detachment, willful ignorance and passivity are luxuries we can't afford.