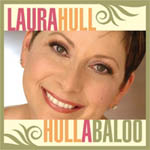 How does one measure the value of a newly-minted pop or jazz tune? Singer/songwriter Laura Hull offers eleven examples on Hullabaloo. Two of these originals ("Spell Remains," "Spin I'm In") won an honorable mention in the 13th Annual Billboard World Songwriting Contest, and another one ("Vacancy In My Heart") was recognized with an Honor Award from the 7th Annual Great American Song Contest.

A native New Yorker, Laura Hull, despite spending her pre-teen and teenage years pursuing musical theatre and entertaining at Catskill Mountain resorts, began a career in Wall Street investment banking and consequently put her musical interests on hold. Three years ago, Hull and some friends developed a one-woman cabaret show, No Regrets, which received positive reviews. Since then, she has been actively performing in the Tri-State Metropolitan Area and appears weekly at the Westin Governor Morris Hotel in Morristown, New Jersey.

After two listenings, my opinion is that the judges of the songwriting organizations mentioned above got it right. The three songs selected for awards are the best of the bunch. The first, "Spell Remains," is a winning up-tempo composition that, despite a Jim Saltzman tenor sax solo and some limited scatting by Laura Hull, plays out in the smooth jazz genre. "Spin I'm In" and "Vacancy In My Heart" are both good pop songs, although the definition of that category generally consists of tunes by rock artists. Both of these songs are presented in a bouncy, mid-tempo setting and serve as reminders of a time when quality songwriters like Sammy Cahn and Jule Styne were composing material. It is relatively easy to forsee that these compositions could easily have musical longevity and appear in the repetoire of any number of cabaret artists' set lists. "Spin I'm In" is further buoyed by Chris Connor's vibes solo.

Interestingly enough, this album was accompanied by a promo DVD, recorded in 2004 at Danny's Skylight Room, a leading NYC cabaret venue, in which Laura Hull is heard, in very brief clips, on songs from the Great American Songbook like "All The Things You Are," "The Nearness of You" and "The Best Is Yet To Come." It is obvious from Hull's fine stage presence and comfort level with familiar songs that she may be doing herself a disservice by concentrating on all original material.

Spell Remains; Crescent Moon; It's Only Me; Being By Myself; Without A Word; Spin I'm In; Distant Shores; Reckless Heart; October Blue; Vacancy In My Heart; Living Out Loud.