Home » Jazz Articles » Zu with Mats Gustafsson: How To Raise An Ox

Zu with Mats Gustafsson: How To Raise An Ox 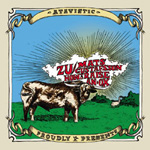 Hailing from Rome, the free jazz power trio Zu has been making considerable waves in the indie underground. With a resume boasting numerous tours and collaborative recording sessions with Eugene Chadbourne, Dälek, The Ex, Nomeansno and Ken Vandermark, the members of Zu have proven themselves capable of holding their own against the underground's heaviest contenders, regardless of genre. The group's most recent endeavor, How To Raise an Ox, also features a guest improviser, saxophonist Mats Gustafsson.

Heavily amplified and deriving inspiration from post-punk as well as such renowned electric free jazz ensembles as Last Exit and Painkiller, Zu is a powerhouse. Veering from grinding Sabbath and glacially paced Melvins-like tempos to fitful barrages of punk-inflected frenzy, their brand of post-rock friendly free jazz has won them a legion of international fans.

The members of Zu also relish open spaces: the contrasting silence around ringing, sustained tones is often as important as the decibel-shattering outbursts that drop in between. They also favor metallic, grinding angular funk rhythms, but never at the expense of that sound. They're are drawn to grating textures, and no other ensemble sounds quite as brusque as Massimo Pupillo's bright, overdriven electric bass, Jacopo Battaglia's pulverizing drums, and Luca Mai's dark, tortured baritone saxophone. The intricate call and response rhythmic structures of the assembled songs leave little room for melody, let alone harmony. As such, one tune easily bleeds into another, engendering a sense of homogeneity to the proceedings as well.

How To Raise an Ox features an excellent and sympathetic collaborator. Mats Gustafsson's frenzied, spastic baritone has been well documented, both on his own albums and numerous high-profile gigs with Ken Vandermark. His recent punkish, garage rock-inspired project, The Thing, has brought him greater notoriety as of late, and this collaboration has numerous similarities to that group.

With Gustafsson and Mai both sticking to their baritone saxophones for the whole of the record, and the rhythm section more boisterous than not, this set veers on the heavy side. The short, Sabbath-esque loping grind of "Bring The War Back Home" contrasts nicely with the railing opening barrage of "Over A Furnace." The title track is a brilliant meditation on using space, timing, and increasing dynamics to build tension, while the closing "The Tiger Teaches The Lamb" invokes Albert Ayler's ecstatic exhortations. Gustafsson and Mai even get in some a capella sparring time on the opening of "The King Devours His Sons." Relief comes in pieces like "Eating The Landscape," "Palace Of Reptiles," and "Beasts Only Die To Be Born" which are sparse, almost pointillistic, lending a much-needed sense of reprieve to an already heavy set.

A bone-crushing affair, How To Raise an Ox is not for the faint of heart, but those accustomed to such sounds will find this to be an especially pleasing program.

Visit Zu on the web.

Over A Furnace; How To Raise An Ox; Eating The Landscape; The King Devours His Sons; Bring The War Back Home; Meat Eater, Solar Bird; Palace Of Reptiles; Beasts Only Die To Be Born; The Tiger Teaches The Lamb.