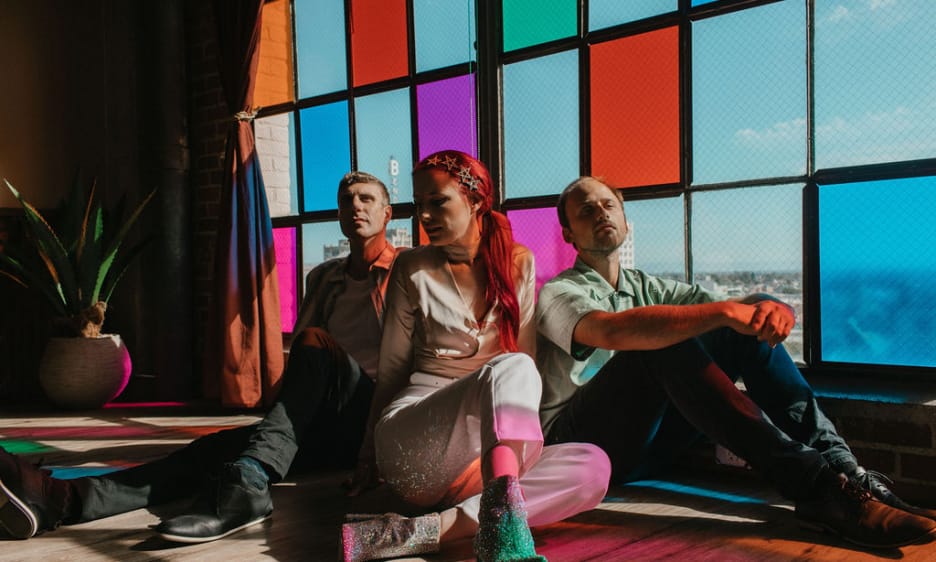 Just because it’s hard, it doesn’t mean it’s not what you wanted
&#151Amber Navran

Last summer, an online-only big band called The Sages of Future Soul recorded their arrangement of Moonchild's "The List," featuring reeds wunderkind Alexa Tarantino. What strikes you on listening to the Sages' version is not so much that it has transcended its origins, but that the original tune has such inbuilt jazz sensibility. Moonchild's Andris Mattson is a big fan of this version. "It was cool. I was so impressed that they transcribed our live arrangement. My favorite part was the big brass arrangement of the chords that we play at the end when we play live. We were raised on big band music."

But aren't Moonchild supposed to be a neo-soul act? Well, yes, they are, but they all trained as jazz musicians. In fact, the three founder members of Moonchild all arrived at the University of Southern California thinking they were going to forge careers as professional jazz players. As Mattson explains, as a child he really wanted to be trumpet-player. "The teacher wanted me to play French horn because no one was picking French horn, but I was very determined [to play trumpet], so I joined a wind ensemble, and also in middle school I had a jazz band." He continued with it in high school, and he was still playing jazz by the time he went to college. It was a similar story with fellow Moonchildren Amber Navran and Max Bryk, who both play flute and saxophone.

"What we do now is so different to what we set out to do," says Navran. "I never imagined I'd be singing or producing or playing piano or working in Logic or recording myself." She thought she'd be playing jazz saxophone and maybe running her own jazz club. "I grew up loving Cannonball and Coltrane, and thinking, that's what I wanna do, but once we got to school we just followed the music where it took us—and it took us in a totally different direction."

Andris Mattson backs her up: "The other day I found a diary entry where I had written my goals in my freshman year at college. The teacher had us write a five-or ten-year plan. So it was, like, Blue Note deal. I wanted to be Ambrose Akinmusire, but within the jazz student body it was obvious that there was other music to be discovered, and Blue Note was no longer necessarily the thing."

What is the thing, as we speak, is the band's new album and forthcoming tour. They are promoting Starfruit, their fifth collection, with a 27-date excursion across the USA beginning in late March. It was supposed to start in Europe, but continuing Covid restrictions have resulted in that leg being postponed to September.

The group's transition from jazz to soul was largely motivated by their collective reaction to one particular album: D'Angelo's Voodoo (Virgin Records, 2000)—also a crucial eye-opener for fellow neo-soul artist Jarrod Lawson. Voodoo marked a Damascene moment: it's an album that the members of Moonchild all heard at around the same time and became obsessed with. As Navran puts it, "It brought us together and made us want to write music together." And according to her, there is a lot of jazz influence in soul music anyway. "I think that's why we were drawn to soul, as jazz musicians. It's part of the same family."

Each of them has always worked individually and remotely on the group's music, an approach that began long before the ravages of Covid-19. "I don't think our process changed too much during the pandemic," said Bryk. "We had lockdown here, no gigs or anything. We started the album process with the song-a-day-for-a-month thing, where we would all write a little idea every day. Some of those ideas ended up on the album. But our process is usually that everyone starts an idea individually, and remotely. And then we trade ideas back and forth, and we always get together and go to a cabin in the woods for a week, say, three times every album cycle."

It's a system perfectly suited to the times, and one which, of course, could never have existed before the 21st century. "Because we're all producers," says Navran, "we're always making beats and ideas on our own, because that's what we love to do. And every once in a while we'll send out an email or a text, saying, 'Oh, do you guys like any of these?' And the ones everybody likes we end up working on and taking up to the cabin and turning into songs."

With their fragmented, cottage-industry model of writing, production and distribution, they have moulded themselves into the shape that the music business has assumed since the decline of conventional record labels. Along with the freedom to do what they want, it also places on them the responsibility to get everything right, which includes choosing the right material in the first place. But Mattson agrees that this is where they feel most comfortable. "It's weird: we've been in the band for ten years, and I still get shy showing the band stuff I've been working on. But with Amber and Max the batting average is super-high, so telling them I don't like something they've written just doesn't happen." Navran elaborates: "Usually a rejected idea's something that doesn't sound like Moonchild, so it's not that we don't like it. It's just not our sound."

Her distinctive voice, with its extraordinary breathiness and wide vibrato, is nowadays instantly recognizable. She has guested with many artists, including Rapsody, 9th Wonder, R+R=NOW, Chris Dave and Daniel Crawford, as well as with Jarrod Lawson, who asked her to supply vocals on his tune "I'll Be Your Radio." Navran sang her part exactly as he had written it, but then the trio had an idea: "We asked if we could add horn parts, because we love to do horn parts. We were actually on tour when we recorded it, in our hotel room in Austria."

Despite their background as real musicians playing real instruments, Moonchild's music is very much grounded in electronica. It started out as a way to avoid spending a fortune on hiring other musicians, but now it feels natural for them to do it that way. However, for their live performance in the NPR Tiny Desk concert series in December 2019 (now viewed nearly four million times), they were accompanied by Efajemue Enenajor Jr Etoroma, Jr. on drums. Don't they prefer the sound of a real drummer, as opposed to synthesized beats? Andris Mattson confesses that he does. "The natural feel is absolutely the best, and we're so lucky to be playing with Efa and to reimagine the songs with live drums. It's really fun." For the NPR show they were also joined by vocalists Erin Bentlage, Michael Mayo and Micah Robinson, although they will not be on the group's tour. Says Mattson, regretfully, "We dream of a future day when we can afford to bring backing vocalists with us." As accomplished horn players and keyboard players—and Mattson also plays guitar—Moonchild don't need a big ensemble of backing musicians: they can take care of everything themselves, the only additional musician on live gigs being Etoroma. The live arrangements, of course, must always take account of the lack of overdubs, so they can't reproduce the tunes exactly as recorded. "Because it's so fun to play live, I don't feel precious about not having all the backing vocals. It's still going to sound good," says Navran.

The dry acoustic favored by Rudy Van Gelder on his classic recordings for Prestige and Blue Note is shared by Moonchild when producing their recordings. Reverb, in other words, is for them something to be used very sparingly. "I'm just drawn to that drier sound," says Bryk. "D'Angelo's Voodoo, for instance, is really dry and crisp. But we do use reverb on Amber's vocal sometimes." And Navran adds, "It's subtle. I think if you put too much on, it takes away some of the breathiness, which is the sound that we really want." How did that breathiness start? "I don't really know," says Navran. "I started singing in college when I met Andris and Max, and I was a horn player for so long, and I think it's because when you play horn you use a lot of air. So when I went to sing it was the same thing. It wasn't conscious, it was kind of how it all came out."

And what about the broken beat drumming? On the track "Don't Hurry Home," which she wrote, the drums are slightly ahead of the beat. "If you want it to feel laid back," says Bryk, "like a J. Dilla groove, you can put the kick [drum] and snare ahead of the beat." Adds Navram: "Any track that has that feel, I just wanna hear it all the time. I spent some time trying to learn how to do it myself—listening to where the snare is placed, and where the bass drum's placed, and where the hi hat's placed around it." The process seems to be quite intuitive: none of them can really explain how it works or why it sounds good.

Not surprisingly, it is Amber Navran who writes Moonchild's lyrics, and they are sometimes a little darker than the music alone might suggest, for example on "What You Wanted." "For me writing lyrics is very therapeutic," she explains. "Getting my thoughts and feelings out that way is really helpful. I came up with the concept [for "What You Wanted"] on tour, because here we are on tour, living our dream. This is what we wanted, best-case scenario, and it's really grueling and tiring and hard in a lot of ways we didn't realize [she laughs]. So, you're in the middle of a tough day, and you didn't sleep much, and you're feeling kinda sick, and everyone's annoying, and you're running late, and you didn't get the chance to have lunch. So, this song is reminding yourself that this is what you wanted. Just because it's hard, it doesn't mean it's not what you wanted."

The band's fifth album, Starfruit, is available from February 11th, followed by a 27-date American tour from March 29 to May 12. The European dates begin in Latvia on September 3, finishing up in Spain on October 5.