By MARK CORROTO
January 3, 2010
Sign in to view read count 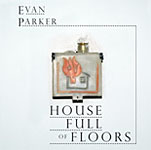 For three stalwarts of the British improvising scene, saxophonist Evan Parker, guitarist John Russell, and bassist John Edwards, getting together for an improvised recording was as natural as three old friends meeting for a round of golf, or possibly a hike in the countryside.

Their approach to music making and improvisation is openly conversant and comfortably natural and their lack of pretension is an admirable characteristic of this recording. Sonically rich, the session was recorded at St. Peter's Church, Whitstable, England during three days in June 2009, the open space and nonchalant music almost creating a sense of complacency. As with most Parker sessions, the saxophonist makes the demanding seem facile and the complex, obvious. Same for Russell and Edwards, old hands making instant music seem amaranthine.

The trio recorded half of the tracks heard here, one shortish piece and three clocking in between 11 and 13 minutes. The players' endurance is equally matched by individual self-restraint, playing consistent, recondite music. Parker squares off with Russell and Russell with Edwards for duos that further evidence the players' sympathy.

The wild card here is the inclusion of Aleksander Kolkowski, who came to record the trio on his wax cylinder, but stayed to play on three tracks. His stroh viola on "Figure Dancing" and saw playing on "Aka AK" shift the direction of the trio into less comfortable music making. The seamless interplay of the familiar converts into an entirely new conversation. The pleasure is in hearing how the trio adapts to a new element.

The disc ends with the very brief "Wind Up," made with Kolkowski's wax cylinder recording overdubbed onto the trio. Curiously attractive, the haunting sound of improvised music sounds as if it is from 1909 instead of 2009 and leaves a chill, as if a ghost's hand has brushed the back of the neck. More please.