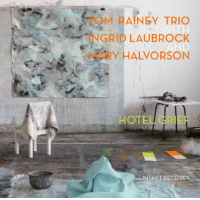 In spite of a bulging discography, Hotel Grief constitutes only the fourth entry under drummer Tom Rainey's leadership. It follows Pool School (Clean Feed, 2010) and Camino Cielo Echo (Intakt, 2012) by the same all star line up, comprising Mary Halvorson on guitar and Ingrid Laubrock on saxophones. After two studio dates, this time out they recorded live on home turf at the Cornelia Street Café in Greenwich Village. Being so familiar with one another's styles means that even though collectively birthed the five selections possess a compelling internal logic, while their skills as improvisers mean they retain the freshness and unpredictability.

And they still remain on at least nodding terms to the jazz tradition through the maintenance of pulse, largely expected instrumental roles and narrative arc. In part that's down to Rainey who brings structure and meter to extemporized settings as much as he brings looseness and vitality to more formal occasions. He's a master of combining timbre and rhythm even in these liberated environments, a trait particularly apparent in the unaccompanied introduction to "Briefly Lompoc." The will it, won't it high wire act inherent in all improvised music is most evident in "Proud Achievements In Botany" which veers between repeated minimalist passages and lurching momentum with explosive saxophone bursts.

In its relaxed pace and finely balanced discourse, "Last Overture" might almost be composed. Laubrock's insistent but not overbearing tenor saxophone dominates. Since relocating across the Atlantic she has become one of the leading saxophonists of her generation. Her abstract expression incorporates overblown falsettos, not necessarily as a signifier of passion, but rather as just another flavor of tonal variety among many. Even when the tempo increases the feel is maintained. Towards the finish Halvorson's fuzzed distortion prompts Rainey into an earthy backbeat which starts Laubrock squalling, in a fine opener which sets out the band's stall in convincing fashion.

As one of the most sought after guitarists on the scene, Halvorson melds a distinctive range of approaches into a readily identifiable voice. She moves from ominous rippling to off the wall invention via reiterated underpinning figures. On the title track her initial ballad style guitar is offset by nervy drum cadences. Over the course of 16 minutes they pass through several moods, as the interplay morphs from the pensive to the intense before subsiding to a delicate filigree guitar/saxophone exchange. That's not the end though. A crescendo of burning fretboard, machine gun chatter and skirling soprano completes an excellent outing.