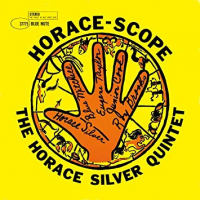 It's highly doubtful there's been a more instantaneously infectious recent release than this new Rudy Van Gelder edition of a 1960 Horace Silver master session. Without as much as a pickup note, the opening measure places the listener in stride with as irresistible a tune as Silver ever composed: "Strollin.'" The remaining pieces are no less addictive; and on each, Silver's compositional flare is as evident on the internal ensemble choruses, transitions, and background riffs as the in-and-out choruses.

While Blue Mitchell and Junior Cook are exceptionally tight on the ensemble passages, they complement one another with their strikingly different solo styles, Mitchell's lyrical lines and smooth, rich trumpet sound contrasting with Cook's scorching probes and vibrato-less, brambly-edged tenor tone. Mitchell blows flawlessly throughout, but it's Cook who makes the memorable statements on both "Strollin'" and "Yeah!," saving his altissimo top tones for the moments when they matter most.

Always a flame-stoking accompanist, Silver as a soloist is still the catch-phrase percussive pianist, perhaps at his best when he limits his solo time (his solo on "Strollin'" is a curiously clumsy combination of "Mairzy Dotes" and "St. Thomas"). Nevertheless, on the up-tempo "Yeah!" he manages to combine the heat with some cohesive storytelling, and he brings a similar connected logic to the churchy funk of his solo on the ensuing "Me and My Baby." What always strikes me as most original about Silver's soloing are the percussive bass-note clusters he drops like bombs in his left hand. (An influence and carryover from his playing days with Blakey?)

Thanks to the late Roy Brooks (what an underrated drummer!), this session swings as much as Silver's early dates with Blakey. At the same time, the faster, more perfunctory version of "Nica's Dream" concluding this Blue Note recording is a reminder that Horace-Scope, for all its delights, is no The Jazz Messengers, the eponymous 1956 Columbia date listed under Blakey's leadership that not only features a deeper, more evocative "Nica's Dream" but represents Silver, Mobley, Byrd, Watkins and Blakey at arguably their collective, creative best.

Strollin'; Where You At?; Without You; Horace-Scope; Yeah!; Me And My Baby; Nica's Dream.