By George Kanzler
December 25, 2008
Sign in to view read count 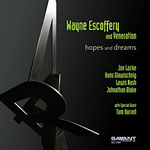 There's a distinguished history of tenor saxophonist and vibes player combos in jazz, including Lucky Thompson/Milt Jackson and Harold Land/Bobby Hutcherson. But those combos featured bands with piano. Tenor Wayne Escoffery and vibraphonist Joe Locke put more emphasis on their teamwork by eliminating the piano in Escoffery's Veneration quartet—quintet on three tracks featuring guest trumpeter Tom Harrell. The band's name alludes to the leader's desire to "play the music of what I consider the masters."

There's a gravity and depth to the young (early 30s) Escoffery's sound and approach, one that clearly has benefited from his exposure to two legendary jazz masters' music during his tenures in the Mingus Big Band and Ben Riley's Monk Legacy band. Unlike some of his contemporaries, who seem more intent on notes and sequences than in forging a sound and story, Escoffery shapes his notes and phrases with a billowing, burly tone, stretching out notes and sculpting solos with lines that resonate lyrically. Locke's concise, incisive mallet comping and dancing solos complement the tenor sax, giving the group an open, uncluttered feel. Bassist Hans Glawischnig and either Lewis Nash or Johnathan Blake on drums complete that limpid ensemble sound.

In a program including three standards and three tunes from jazz sources, Escoffery's own pair of originals stand out, especially the title tune, an incantatory melody over a slow backbeat shuffle with Locke repeating a vamp on vibes and soloing on marimba. Mingus' "Noon Night," with its sweeping tenor statement and haunting coda, and Bill Barron's elegiac "Dedication to Wanda," Harrell's trumpet limning the ballad melody as Escoffery improvises, are fully realized, indelible performances. And for gratifying examples of how to handle faster tempos with an urgency that allows for expression as well as velocity, there are the solos and Blake's kinetic drumming on "Love Walked In" and the soulful swing of "Chronic Blues," a little known Coltrane composition with a brawny yet shapely tenor solo.

Hopes and Dreams; Liason; Love Walked In; Noon Night; Chronic Blues; Dedication to Wanda; The Sake of It; The Face I Love.