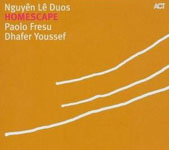 There's no substitute for a convincing musical concept and language, but if an artist doesn't pay equal attention to tone, then that musical message can become easily diluted. The two are, in fact, inextricably linked—in particular with guitarists, who are often as well-known for the texture of their sound as the notes they play.

Guitarist Nguyên Lê has been as relentless as Pat Metheny when it comes to sound. He's no stranger to the concept of sonic manipulation and editing in post-production, but Homescape is the most sculpted record of his career, relying on his shaping the sound after the fact—as well as the performances of the two musicians he enlisted for this series of duets.

Lê's duets with trumpeter Paolo Fresu stem from a series of completely improvised sessions that, if any, used simple thematic fragments as a foundation. The tracks with oudist/vocalist Dhafer Youssef are more constructed in nature, though improvisation is still a fundamental feature. The majority of Homescape was recorded at Lê's home, much like guitarist Kurt Rosenwinkel's Heartcore (Verve, 2003). But while Rosenwinkel's disc was still unequivocally a jazz record, despite its urban rhythms and textures, Lê's purview is significantly broader.

Lê, born in Paris to Vietnamese parents, has long been intrigued with the possibilities of cultural cross-pollination in music—due in part, no doubt, to his own inherent multiculturalism. But while it's possible to identify many of the trace elements on Homescape, what's perhaps most intriguing is the way Lê, Fresu and Youssef blend a wider cross-section of sources. They combine music of the Near, Middle and Far East with urban North American rhythms and, at least some of the time, the harmonic language of jazz, resulting in true world music bereft of any borders.

Lê has a remarkable ability to take a series of lengthy improvisations with Fresu and section out portions that, after editing and sonic enhancements, feel like intended musical miniatures. His work is as impressive as that of trumpeter Markus Stockhausen, who approached Karta (ECM, 2000) similarly. But by spending significantly more time shaping the music, Lê has created a far more diverse audioscape. The music ranges from haunting beauty and spacious tranquility to edgier grooves and electronic pulses, with Fresu often mining post-Miles territory. As a player, Lê can speak many languages, from metallic semi-shredding to clean, bell-like tones that he broadens through reverb to create lush textural soundscapes.

Sequencing is equally important to Homescape. Having the luxury to work in one's home studio and experiment to one's heart's content can lead to a "œforest for the trees" syndrome, where the artist becomes too close to the music. But Lê understands narrative, and while the performances in and of themselves are wonderful, the cohesive aural travelogue experience of Homescape is what makes it an hour worth spending again and again.