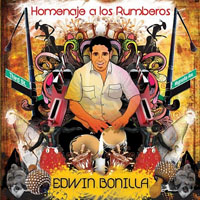 Homenaje a los Rumberos is a hyper-swinging and high-octane danceable salsa recording by Edwin Bonilla, that truly takes dancers as its true North. Bonilla, who keeps an awfully busy schedule performing and working as a first-call studio percussionist for quite a broad assortment of groups and figures, became a darling of the international salsa DJ scene with his penchant for hardcore, get-down-and-dirty productions under his name. This is the type of music popularly referred to in Spanish as capable of "poner a bailar hasta los muertos" (get even the dead to get up and dance).

Bonilla manages to do so by sticking to his formula of crafting productions with a lot for everyone. Different genres and tempos are tapped thus bridging age and taste chasms. Varying musical textures are achieved through the appropriate tuning of instruments and corresponding sound mix. Hence, Bonilla's recordings sound "retrovanguardist," while becoming mini-musical encyclopedias, as forgotten musical veins are brought up in new settings and with updated arrangements that manage to stay comfortably familiar nonetheless.

In the end, the most important factor is the musical depth and superb performances throughout. All solos in this recording are killers. Bonilla is a master at laying back, so much so that it seems as though he will not be able to jump ahead, only to then hit hard and fast with unparalleled skill and speed, heard to great effect during his timbale solos in "No Hay Quién Se Aguante"—which also features a nasty-in-your-face trumpet solo—"Timbalero Suena," and "Canto Abacuá;" his conga solos in "Homenaje a los Rumberos" and "Ella Está en otra Rumba;" and his bongo turns in "Yambú Matancero" and "Adivíname y Olvídate," the latter a classic salsa tune, featuring a scorching tip of the hat to the classic Grupo Folklórico y Experimental Nuevayorquino.

There are so many musical nuggets to mine herein, the arrangements are rough, engaging and aggressive, and percussionist Giovanni Hidalgo's participation is an unexpected gem. The breaks propel the music rather than slow it down or distract the dancing beat. The lead singers are macho and strong, with plenty of zest, ingenuity and taste in their vocal improvisations. The supporting cast is also worthy of attention, as is the leader's driven means of propelling them into greatness.

Homenaje a los Rumberos bears repeated listening while and after dancing your ass off.