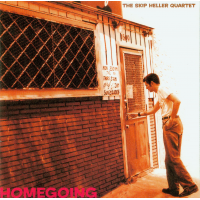 Skip Heller is a bit hard to describe. And, that is what is so splendid about him and his art. He is a West Coast Uri Caine who plays the guitar and has a bent sense of humor. On Homegoing, Heller returns to his native Philadelphia, a repatriated expatriate. After several well-received recordings, both as leader and sideman, on the left coast, Heller produces the most original and fun guitar-organ jazz recording this year.

Homegoing is bursting with an original jazz sense of humor, as evidenced on the opening "From the Night Before," which sounds like the sound track to 1970s exploitation television. Lee Toft and Robert Drasnin add wonderful horns to the arrangement that is so perfectly retro that it sounds brand new. Dave Alvin, vocalist for the Blasters, is on hand for the vocals on the Sammie Cahn/Jule Styne standard "Time After Time" which sounds as if performed by the band at a Jewish wedding. The interplay between Heller and organist Mike Bolger is telepathic. Heller's eponymous hommage to Emily Remler is light and airy and very much in the tradition of this prominent late jazz guitarist.

Comparisons with Uri Caine are not without basis. Heller and Caine are friends, both hailing form the city of brotherly love. Caine had already covered the Mahler territory on his Mahler recordings for Winter & Winter but Heller had a different idea. On "The Funeral March from Malher's Symphony Number 5," Heller takes some nakedly Hebraic classical music and spins it into a brilliant rolling Jimmy Smith vamp. Drasnin's alto playing is otherworldly over Bolger's light organ march. Alvin returns for the vocals on Marion Walter Jacob's "I Just Keep Lovin' Her." Heller's guitar is jumping.

Skip Heller need not be a best-kept secret any longer. His talent and scope are enormous, drawing from a dozen traditions at once in a beautifully schizophrenic synthesis of sound. Homegoing coupled with the recently released Career Suicide: The Skip Heller Anthology 1994-2001 (Dionysus, 2002) are great introductions to this noted talent.

Visit Skip Heller on the web.

From the Night Before; Maydele; Time After Time; Nika's Dowry; Emily Remler; Funeral March from Mahler, Symphony #5; The 'Intensive' Girl; I Just Keep Lovin' Her; Thinking Of You.