BY C. MICHAEL BAILEY
November 29, 2014
Sign in to view read count
Elbowing their way into the male chorus arena from none other than the land of the Norwegian Bachelor Farmers—Minnesota—the nine-voice Cantus squarely challenges San Francisco's Chanticleer for the prize of best traditional Christmas choral release. A frequent performer and favorite of A Prairie Home Companion, Cantus has carved out their rightful place among choral groups. Considered here are the group's two finest Christmas offerings. 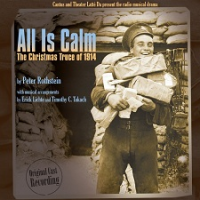 Cantus
All is Calm: The Christmas Truce of 1914
Cantus Records
2008

Was this a gradable contest, Cantus would achieve a 10-out-of-10 for sheer inventiveness for All is Calm: The Christmas Truce of 1914. It is all the more appropriate to celebrate this recording and its concept as we experience its centenary this Christmas season. The story is well known. In the absence of a Christmas Truce, British and German forces experienced the unofficial cessations of fighting along the length of the Western Front. The first Christmas Truce, celebrated here, started on Christmas Eve, 24 December 1914, when German troops began decorating the area around their trenches in the region of Ypres, Belgium and particularly in Saint-Yvon.

The Germans soldiers began with the traditional placing candles on Christmas trees in their trenches, while singing Christmas carols. The British offered carols of their own, with the opposing sides shouting Christmas greetings to each other. Soon thereafter, the soldiers entered No Man's Land, where they exchanged gifts, such as food, tobacco and alcohol, and souvenirs such as buttons and hats. Fighting in the region stopped, allowing time for the recently killed soldiers to be collected and buried.

All is Calm: The Christmas Truce of 1914 was programmed by Peter Rothstein to be a radio drama depicting this event in words and music. But this is no singspiel. Rothstein has interwoven popular songs of the period with patriotic tunes and carefully selected carols sung in their original German, French and English. Interspersed are spoken reminiscences from soldiers famous and unknown. The words of Owen and Sassoon share the stage with privates and corporals unknown.

Stunning are "Minuit chrétiens (O Holy Night)" in the original French and "O Tannenbaum" in German. The program reminds us today that the tradition of the Christmas Tree was brought to America by the Germans, who wrote "Stille Nacht." Cantus is the vehicle for this genius program, singing with the optimistic virility and hubris turned to pensiveness and loss. One hundred years ago...

This is borne out when comparing We Sing Christmas with Christmas with Cantus. Chanticleer's repertoire provides a healthy swath of the holiday mainstream from 15th Century polyphony (Josquin Desprez's "O Virgo Virginum" to 20th Century English Choral music (Holtz's "In the Bleak Midwinter). Cantus is much more daring in their selections, highlighting the colder climes of Eastern Europe in the 16th Century Slovenian Carol, "Ta Stara Bozicnz Pejsen" and Rachmaninoff's "Priidite, Pokolonimsa" form his Vespers to the traditional American "Have Yourself a Merry Little Christmas." The group goes outside-the-box with the traditional Muskogee Indian Song "Heleluyan" and a folky Peter, Paul and Mary "Do You Hear What I Hear."

Overlap between the two include "Coventry Carol" and Beibl's "Ave Maria." Cantus' smaller nonet forces, strip down the sound, providing only that which is necessary when compared to Chanticleer's larger voice numbers. The effect is a more pastoral and earthy. The beauty of the Cantus recording is that it competes with no one and makes an excellent alternative to consider in the holiday music arena.