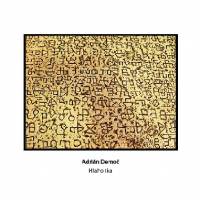 Hlaholika (the word is the name of a now unused Slav font) is Adrián Demoč's third album, following the brief Zikkurat / Variations For Piano (and/OAR, 2010) and the very promising Žiadba (Another Timbre, 2019). Another Timbre must have been impressed by Demoč, as he was one of four composers that the label chose in March 2020 to each write a "quarantine commission" during the covid lockdown in Europe. Sitting at the heart of this album, its title track is the third such composition to be released, following those by Clara de Asís and Judith Hamann. Clocking in at just under twenty minutes, Demoč's piece is shorter than the previous quarantine commissions, but it maintains their high quality.

The composition is a quintet written for Apartment House, at Simon Reynell's request, and the performance by the group is well up to their usual impeccably high standards, with the five instruments—piano, violin, viola, double bass, clarinet—fitting together well without any gaps. As on his previous Another Timbre disc, Demoč keeps things acoustic and simple, seeming to relish the sound of each instrument and, so, lingering to savour each one rather than rushing. The piece evolves slowly and gently, with each new sound fitting what has gone before.

Recorded at the same August 2020 recording session as "Hlaholika," the album's opening track "Ma fin est mon commencement (2019)," which features viola, piano and clarinet, and the closer ..."mit Simon und Jürg (und Philip ist auch...) (2019)"—a duo of violin and double bass —display the same strengths as "Hlaholika," so they too are built around sustained notes designed to highlight the sounds of the instruments themselves. Demoč's pragmatism is illustrated by the fact that he knew his commission piece would be recorded at the same session as those other two pieces, and so he chose to write it for the five instruments which he knew would be there. Consequently, the three pieces are highly compatible and hang together well, all clearly originating from the same source.

The album's other track, the seven-minute "Lešenie k zahĺbeniu (2007)," was performed by (unnamed) students of the Janáček Academy of Music and Performing Arts, Brno, Czechia and dates from a May 2005 recording. Demoč has said of the piece, "It remains an important piece for me. I consider it something like my opus 1." Not only does the composition fit neatly amongst the three 2020 recordings, its stylistic similarity to them also throws light on Demoč's composing methodology and inclinations. Altogether, this album makes easy, enjoyable listening and further advances Demoč's already burgeoning reputation.