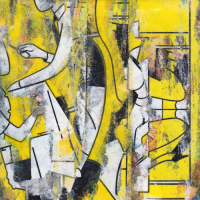 Raised in Bhutan, but based in North Carolina, Dorji has shown a determination to avoid well-travelled routes, manifest on a handful of diverse releases in the past decade, many in tandem with Chicago-based percussionist Damon, who shares a similar outlook.

On Hiljaisuus, they unveil a distinctive slant on the power trio, obvious right from the start of the half-hour plus "Fontanelles 1 & 2." Bowed cymbals and twangy detuned guitar create an unusual but highly-charged atmosphere, which is only heightened by the addition of Rempis' vocalized saxophone at his most impassioned. Thereafter they shift into a raw, anguished slow-burn, which includes an astonishing falsetto-register warbling from the reedman, showing that he too is immersed in pursuit of novel but apt timbres. It all suggests an impending conflagration as Damon amasses density and Dorji ramps up the rhetoric.

They don't disappoint, pushing the needle into the red zone for the duration. Rempis is a canny operator, his reiterated phrases acting as a springboard and helping to maintain interest even as they press towards the extremes. Damon finds a way of pushing his piledriving wall of sound onwards even when it seems things can't go any further, fuelling a ringing, raging exorcism conducted by the twin-pronged attack.

After that catharsis, there are five minutes of chiming clattery respite before, batteries recharged, they reboot with Rempis spinning out his trademark sinuous dazzling note-filled lines. Dorji builds tension through unlikely, incessantly-nagging textures, sounding like someone beating sheet metal at one point, before a concluding skronk explosion.

Although the 15-minute "Gash" begins with a spacious intersection of baritone plosives, jangling guitar and percussive flurries, it moves in fits and starts towards the anticipated mayhem of inchoate shrieks, scrubbed guitar and rambunctious tattoo. Following a similar trajectory to the first cut, a comedown of dirge-like baritone saxophone and throbbing guitar provides temporary relief before another rousing finale.

While the combination of power and purpose will blow away any cobwebs in style perhaps, more unexpectedly, it will also stimulate and engage in equal measure.