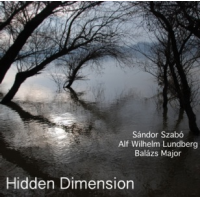 Some musical meetings do not need much preparation, even tough the musicians are located thousands of kilometers apart, surrounded by different sonic landscapes and musical traditions. The meeting itself can spark and enlighten new roads of expressions. That is what happened when Norwegian guitar artist Alf Wilhelm Lundberg, leader of the chamber jazz outfit Norchestra and player of the custom-built 8- string Brahms guitar, was invited to play with Hungarian guitarist Sandór Szabó, who plays custom-made 12-string guitars. Both share a classical guitar background, openness and curiosity about old and new approaches to acoustic improvisation, an affinity for storytelling in music, and great joy in finding like- minded explorers.

Hidden Dimension—released as a high-quality digital release only—is the first-ever musical meeting between Lundberg and Szabó, recorded without any rehearsal, preparation, written compositions or guidelines. The music is a pure product of the moment and the ability of these gifted guitarists, assisted by percussionist Balázs Major, a close collaborator of Szabó, to surrender fully to music.

It is obvious from the first seconds that the interaction between the three musicians is natural. In the seven musical conversations ideas, feelings, stories and melodies are exchanged, embraced, elaborated, shaped as full-blown themes and than used as reflections for even more fresh ideas that continue to enrich the music's flow, letting it grow and blossom in an organic manner. These musical tales radiate peace and calm. Lundberg and Szabó clearly enjoy listening to each other and enable their shared expressions to breath in their own pace.

Each of these nuanced conversations tells a different story: the excitement of finding a close soul is expressed joyfully in the first; the second, a mysterious, multilayered narrative about distant and ancient places and sounds; the third, an intricate and busy talk on myriad of topics. The atmosphere is changed on the fourth piece, for a light, associative exchange of fleeting ideas. Major bridges between Lundberg and Szabó on the cinematic narrative of the fifth with imagination and playfulness, while the sixth is a contemplative exploration of a new, shared language and its many possibilities. The cycle is closed with the charming melody of the seventh conversation.

Each conversation adds another dimension to the music while keeping it fresh, innocent and beautiful..