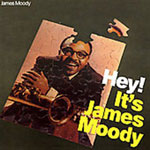 There is nothing earth-shattering on this collection, which was originally issued as two LPs: Flute'n The Blues (1956) and Hey! It's James Moody (1959). What remains remarkable, though, is how fresh James Moody sounds, even when some of the arrangements show their age and some of the ensemble passages lack precise intonation. Indeed, some of these tracks have passed into jazz lore, including "Last Train from Overbrook (the salute to Moody's return to the scene) with Eddie Jefferson's ebullient vocal, as well as an instrumental take and the classic Moody-Jefferson piece "I'm in the Mood For Love, performed since as "Moody's Mood For Love.

The leader excels on alto and tenor, but his full-bodied, soulful and technically sure flute playing deserves special mention. He shines on a languid "Indian Summer that is far too short, and "Trouble In De Lowlands finds him appropriately mournful. "Tali is a bit too precious, but Moody almost salvages it with a far-too-short swinging segment. Likewise, the out-of-tune opening ensemble threatens to sabotage the leader's offering, as well as that of underrated trumpeter Johnny Coles, on "Flute'n The Blues. The closing, riff-based ensemble, however, is tighter.

On tenor, Moody soulfully explores "Don't Blame Me, taking his time to build a compelling solo. On "Woody'N You (aka "Algo Bueno ), Dizzy Gillespie's tribute to Woody Herman, he soars again on tenor, using fragments of the melody to launch segments of blowing choruses. His tenor playing, individualized with gruff, acidic traces, is always compelling.

Jefferson is featured extensively on pieces including "Birdland Story, "I Cover the Waterfront, the majestically paced "Workshop and the classics "Parker's Mood and "I'm in the Mood for Love (complete with that wild falsetto spot). The latter two are arguably the singer's most moving works on record.

This release is a portrait of James Moody's output from the late '50s. Here and there it can sound a bit dated, mainly because the ensembles and tempi are too often too much the same, number after number. Moody's warm, passionate, focused voice, however, stands out. Whether in the studio or in the band box, he was then—and remains now—exciting, soulful and expressive.

Andrew Rowan works in both jazz music as a producer, manager, and writer, and he is also a college educator (English).