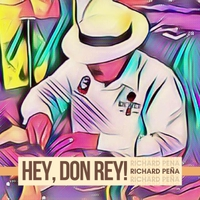 Puerto Rico-based composer/guitarist Richard Peña may be well-versed in Latin jazz but he isn't afraid to venture beyond the genre. Peña has a passion for setting the bar higher. With every release, he explores something new. On Hey, Don Rey!, Peña investigates post-bop and fusion sounds.

What is most impressive about Peña's playing style is that while it is intricate, he is not like those guitarists who are only technical for the sake of being technical. He "speaks to the soul."

Peña minutely dictates the dynamics of the tracks, igniting his music with clever melodic phrases and imbuing it with brio and vitality. He makes music which feels honest and fun. This is a record that is meant to move listeners, giving a deep sonic experience.

The musicianship on the album is impeccable and so is the production, which also helped Peña take the LP to the next level. Peña is an artist to watch, not just in the Latin jazz community but jazz in general.