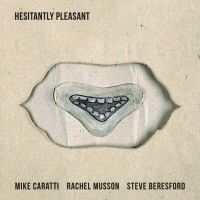 After completing his studies at Middlesex University in London, Australian-born drummer Mike Caratti relocated to Perth, but he still makes occasional return visits to the UK. The seven improvised cuts which make up Hesitantly Pleasant were recorded during one such instance in January 2017 and have made it to release in double quick time. Joining Caratti are the British pairing of saxophonist Rachel Musson and pianist Steve Beresford. Their spontaneous outpourings recall a wide array of musics in a flowing inventive stream which doesn't deny its jazz roots. Although they gravitate towards choppy free style interaction, when they reach a bubbling boil they hold back from running dry.

Caratti creates a rhythmic carpet, loosely or closely woven, from little bursts of activity. But in an egalitarian outlook not only the drummer ensures momentum. Both Musson and Beresford help keep things moving. Beresford ranges unpredictably widely from percussive piano to scratchy electronics and romantic stylings, while Musson's sporadic jazzy inflections and reiterated phrases aid both impetus and accessibility. However in keeping with the group ethos, they don't always lead to narrative development. Although she possesses an innate lyricism, so that it sometimes seems that a tune is trying to get out, Musson also pitches overblown multiphonics, plosives and squeals into the melting pot.

The intermittently propulsive title cut foretells the habitually fast changing interplay prevalent on this disc. One of the high points is "Complex Footwork And Violent Movement" with reeling fire music conjured from squalling tenor, staccato piano and stormy drums. "Psychic Fair" further illustrates the often blustery ambience, with both Musson and Beresford's offkilter patterns enhancing Caratti's lurching everything-but-the-kitchen-sink rumble. Notwithstanding their collective genesis, at times the pieces display a pleasing structure, even taking ABA form, most notably in "Nunc Pro Tunc" which begins with barely audible whistles followed by a bumpy middle section, before finally reverting to near inaudible squeaks to finish.

Although the geography militates against it, this is a unit which deserves to be more than a good-natured one off.