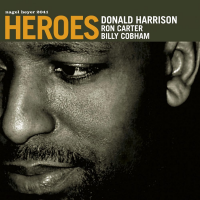 Stripping down from his quintet début on Nagel Heyer, '02's Real Life Stories , saxophonist Donald Harrison teams up with bassist Ron Carter and drummer Billy Cobham, two of his personal heroes. Having an intermittent history with both musicians, Harrison obviously felt that the combination would provide the perfect combination of groove, freedom and exploration. The result is a mainstream set that purposefully raises the bar for Harrison, forcing him to think outside the box and deliver one of his most essential recordings. Almost.

With a background that included time with Art Blakey's Jazz Messengers as well as Tony Williams, Terence Blanchard and Eddie Palmieri, Harrison has honed an honest sound on the alto that, while it clearly references Charlie Parker, is less about pyrotechnic displays and more about serving the song. Cobham, who has a reputation for musical depth that is sometimes overshadowed by his prodigious technique, provides a surprisingly musical performance; rarely has he sounded so loose and relaxed. Carter is, as always, the perfect accompanist and equal; but in this trio setting, where he is as relied upon as much to create harmonic form as is Harrison, Carter turns in one of his better performances in recent years.

For a trio that had not performed together before this recording date, they are remarkably simpatico. The title track is all about implied time; Cobham is all over the kit, pushing Harrison to keep things focused while Carter plays loosely with time, often suggesting but never quite establishing a straight groove. Most of Harrison's compositions are sketches; roadmaps to be used as stepping off points. "Blues for a New Millennium" has little to do with blues form, but manages to capture a blue feel. "One of a Kind" is a more straightforward blues with Cobham, again, dancing around the track with Carter first suggesting then ultimately resolving into a full-out swing; Harrison is at his most playful here, with angular lines that ripple at every turn.

The most revealing tracks, however, are the duets with Carter. "My Funny Valentine" is haunting and melancholic, with Harrison delivering a plaintive reading and Carter carefully avoiding the obvious. "Double Trouble" is an impromptu exploration of "I Got Rhythm," but in the hands of Carter and Harrison it becomes more; a freewheeling tune that swings fervently but, again, stays away from cliché.

If there is a misstep on this record it is fleshing out the 49-minute set to 65-minutes with three "bonus" tracks of Harrison with bassist Vicente Archer and John Lamkin. When placed in direct contrast with the looser improvisational style of Carter and Cobham, these tracks feel far too obvious and considered, with too strong a backbeat. While they might work independently, when combined with the other tracks they only succeed in highlighting their own inherent weakness. Harrison should have left well enough alone and stuck with a shorter but ultimately more satisfying set.