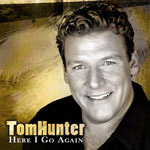 Using his big, booming baritone voice, Tom Hunter sings jazz and blues with a convincing delivery. Much of the program on Here I Go Again, his third album, recalls the traditional spirit of Dr. John and like-minded artists from the Big Easy. Coincidentally, he also plays organ and piano, making those keys sparkle alongside each vocal selection. However, Hunter has put so much variety into his program that there's just no way to pigeonhole him.

Never trust a man who hasn't paid his dues. Hunter has been there, done that, and it shows up in each of these twelve selections. After music school, he joined the navy, then moved around a bit, from New York to South Carolina and settling in Minneapolis. While in the South, he worked for three years in a down-home setting at Myrtle Beach. Today, he continues to work more than 300 nights a year.

The Sonny Rollins classic Tenor Madness is offered up as an instrumental number. Hunter's piano swings and romps along with acoustic bass, electric guitar, and drums. The quartet drives with plenty of spirit. Hunter's vocals give the rest of the album a soulful element that comes loaded with genuine, deep-down soul. The songs that he's selected represent unique and familiar individuals such as Ray Charles, Tom Waits, Dr. John, Billy Joel, and Doc Pomus.

Two original songs reveal the true blue spirit of Hunter's character. He's just a tad over forty, but he's seen the world through a bluesman's eyes and a jazzman's ears. And he continues to do his thing night after night.

Ain't you glad you went with me
Way on down the Mississippi
We took a boat to the land of dreams
Heaven and earth, they call it Basin Street.

I Underestimated You; Imitation of Love; Here I Go Again; The Night is a Hunter; New York State of Mind; Ever Since the World Began; New Coat of Paint; Basin Street Blues; Tenor Madness; Nothing