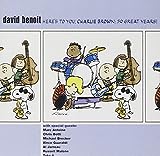 Though Guiraldi himself contributes to his famous "Linus and Lucy Theme," which opens the album as it opened so many ears to his music, Benoit takes the Brown baton from then on, opening the trio format to a number of other guests. Al Jarreau’s take on Clark Gesner’s "Happiness Is" (from "You’re a Good Man, Charlie Brown") sounds warm and foggy, though slightly less advising than in some renditions of the famous summer stock musical. Similarly, the soulful washes of Take 6’s "Christmas Time Is Here" are more musical than the screechy mono children’s chorus featured in the beloved holiday special.

In addition to Guiraldi’s compostions, Benoit sneaks in a pair of his own. "Linus Tells Charlie" is a smoky piano bar ballad featuring trumpeter Chris Botti (whose muted horn sounds vaguely like the adults on older "Peanuts" shows). "Getting Ready" builds off an opening piano theme with the help of a right hand contrast reminiscent of "Linus and Lucy." Michael Brecker’s sax lines on "Frieda" may not be as fiery as her hair, but they speak of hot and playful young love nonetheless. "Red Baron" neither flies nor attacks, instead skimming along Marc Antoine’s gently-plucked field like a doghouse with delusions of grandeur. Russell Malone’s no frettin’ fret lines on "Blue Charlie Brown" are bluesy, but never sad. They just keep on plugging along, just like their titular hero.