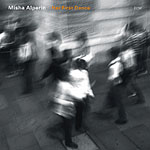 With Her First Dance, Moldavian pianist Misha Alperin returns to ECM six years after the release of Night (2002). He brings with him two past musical partners—cellist Anja Lechner, who appeared on Night, and also with bandoneonist Dino Saluzzi on the phenomenal Ojos Negros (ECM, 2007), and horn player Arkady Shilkloper, whom Alperin first met in 1983. The two recorded their first ECM disc in 1989, Wave Of Sorrow (1990), under the name Mikhail Alperin.

The mood of the music, composed by Alperin except for Shilkloper's "The Russian Song," is immediate and strong from the first notes. Alperin has spent his career fusing jazz, as he understands the term, with the folk music of Moldavia, which has Russian and Romanian roots, with every tune's basis in that music. The album is also held together by a single overarching theme, which is developed and mutated on each track, using different personnel.

The emotional climate is generally somber but not morose, achieving an intensity by creating a sense of being alone on a vast plain, despite the occasional romps of "Jump" and the fast sections of "Vayan." This is introspective music, with Alperin carefully controlling the overall pace through the arrangements. Exactly how much of the music is notated and how music is improvised is unclear, becoming unimportant in that Alperin's musical and emotional world is extremely vivid and moving.

Helping to create this sound world is the location of the recording, the Auditorio Radio Svizzera in Lugano, Switzerland. Although a number of recent ECM recordings have taken place there, the room's acoustic characteristics came to light on trumpeter Enrico Rava and pianist Stefano Bollani's The Third Man (ECM, 2008).

Lechner and Shilkloper are able to take full advantage of the room's warm and lively acoustics. Both are extremely lyrical players who make their respective instruments sing, filling the space with their lines. Their skill and passion are particularly noticeable when they play together, particularly as a duo on Shilkloper's "The Russian Song," which could easily be considered the album's high point, but also as a full trio on "Triflis."

Alperin is a masterful pianist whose precision belies his classical background, playing five solo pieces, two with Lechner, and one with Shilkloper. Although his technical ability is easily heard and impressive, his full musical gifts are brought to the fore when he plays with Lechner and Shilkloper, meshing his emotions, which evolve from his sharp and pointed playing, with their legato and singing lines.

If the success of an album is measured by the degree to which the emotions created demand and get full attention, then Her First Dance is a winner.