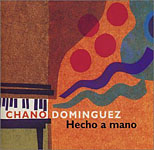 The cross-pollination of Latin music and jazz has been going on for decades. Typically, a jazz group will borrow Latin grooves and instrumentation, while Latin players apply their rhythms and harmonies to the American standards songbook. It's usually a rather self-conscious blending in which the genre lines are still obvious; only a few musicians have managed to make the mix organic (Chick Corea, Michel Camilo, and Al DiMeola's The Grande Passion CD come to mind).

Now we have Chano Dominguez, a fine pianist from Cadiz, Spain, who weaves jazz with a flamenco approach. Hecho a Mano (aka Handmade) was recorded in Madrid in September, 1996, for Nuba Records, and released on October 15, 2002 by Sunnyside. Dominguez's ten originals integrate jazz improvisation and harmonies with the fire and mystery of his native culture; it's a seamless blend, exciting and original. Dominguez also breathes fresh life into a pair of classics: "Turn Out the Stars" gets a new Spanish subtitle {"You Turn On the Stars") as a tribute to composer Bill Evans; it also gets a new feel as a lovely flamenco waltz. Monk's quirky "Bemsha Swing" becomes a delightful mix of piano and powerful hand-clapping and shoe-tapping.

Dominguez introduces the American listener to a broad range of flamenco forms which extend far beyond the Hollywood stereotype of the fierce, scowling dancer to include the tango, the exuberant buleria and sequidilla, and the bluesy solea. His compositions range from a musical description of a woman's soul ("Alma de Mujer"), which builds from tenderness to passion, to the tabla-inflected "Cardomono," the gypsy "Retaila" and the sexy fandango, "Pinar Hondo." "Cilantro y Comino" is an extended journey that's full of rhythmic surprises and joyful energy. All the musicians are first-rate, with notable solos delivered by bassist Javier Colina and guitarist Tito Alcedo. This is exciting, soulful, memorable music.