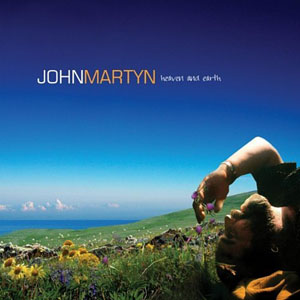 In a world filled with happiness and hurt, there's a gaping chasm between those that are aware and those that aren't. When John Martyn passed away months before his 60th birthday in 2009, the world lost one of the most painfully confessional singer/songwriters of the past half century. "Some people keep diaries," said Phil Cunningham in a 2007 BBC2 TV series, "John makes records." That Martyn could sing "Hurt in Your Heart," from his heart-wrenching breakup record, Grace & Danger (Island, 1980), nearly 30 years on and still be driven to tears speaks to the depth of the Surrey-born/Glasgow-raised guitarist/vocalist's pain...and the cathartic power of his music. His ex-wife suggested, in the same documentary, that "so much emotion left John through his songs that there wasn't much left for her." "Can't Turn Back the Years," one of Heaven and Earth's most profoundly poignant songs, is as fine and heart-rending a follow-up to "Hurt in Your Heart" as Martyn ever wrote.

Martyn's voice—the epitome of self-expression, with his characteristically slurry articulation and conversational delivery—is at the heart of this collection of nine originals. Martyn tackles a variety of revelatory personal matters, like "Willing to Work" ("give me a word I'll say it; give me a note I'll play it"), love (the title track) and his own dysfunction ("Bad Company"). Fans of Martyn's earliest work, including the desert island classic, Solid Air (Island, 1973) may be disappointed at the near-complete absence of a unique acoustic guitarist who, armed with an Echoplex and acoustic bassist Danny Thompson, released one of the most experimental folk albums ever to come from the British folk scene, the also-classic Live at Leeds (Independent, 1976). Instead, Heaven and Earth is heavy on groove—more Cooltide (One World, 1991) than Solid Air.

Martyn doesn't entirely eschew his acoustic roots entirely, however, but the arrangements on "Gambler" and the folksy "Colour" remain more polished and pop-centric. Still, Martyn has always been about stylistic amalgamation, with plenty of folk, pop and jazz; longtime keyboardist Spencer Cozens adds plenty of color and sheen to vamp-driven songs like the booty-shaking "Heel of the Hunt," and harmonic depth and sophistication to the laidback title track.

Martyn was always a loyal leader, too, with some of Heaven and Earth's players dating even farther back than Cozens, specifically bassists John Giblin and Alan Thompson, who first appeared on Grace & Danger and Glorious Fool (Warner Bros., 1982), respectively. Pop superstar Phil Collins—who produced and played drums on Grace & Danger—contributes background vocals on tracks like "Can't Turn Back the Years," while The Band's Garth Hudson adds a little Zydeco touch on accordion to the greasy funk of "Stand Amazed."

But at the center of it all is Martyn—whose voice, in this case, eclipses his ever-fine guitar work. Listening to Martyn is to be privy to his deepest, darkest secrets, and with Heaven and Earth he managed to consolidate many of his stylistic interests for a final record---posthumously completed, with respect and love, by friend/producer/engineer Gary Pollitt—that may not reach the heights of some of his early classics...but it's darn close.

Heel of the Hunt; Stand Amazed; Heaven and Earth; Bad Company; Could've Told You Before I Met You; Gambler; Can't Turn Back the Years; Colour; Willing to Work.