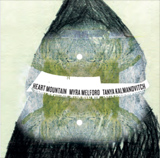 Heart Mountain is the first duo recording of pianist Myra Melford and violist/violinist Tanya Kalmanovitch. Ajay Heble, artistic director of the 2003 Guelph International Jazz Festival, suggested a duet with Melford when unforeseen circumstances prevented the scheduled performance of Kalmanovitch's quartet. So successful was their unplanned meeting that they decided to reconvene for this 2005 studio effort.

With song titles inspired by locations in Alberta, Canada (Kalmanovitch's birthplace) and the Himalayas (where both have traveled), these brief free-form explorations uncover a variety of moods in short order; the average piece is less than three minutes long. Blending cautious accompaniment with imposing delivery, they share a conversational dialogue that moves from whispered confidence to impassioned argument with ease.

Revealing a wellspring of timbral potential, the pair uses extended techniques to generate a rich palette of tonal color. Melford's touch veers from resonant, pulverizing clusters to ghostly, under the lid string glisses. Kalmanovitch bows with sinewy élan one minute, tenuous grace the next; varying her attack with dramatic flair, she makes a perfect foil for Melford's all-encompassing style.

Despite their jazz credentials, it's their classical backgrounds that come to the fore in this unadorned setting. Folksy Bartokian dissonances ("Cave and Basin"), soaring romantic modernism ("Kaligandhaki"), Viennese school-inspired pointillism ("Wapama") and throttling, Carterian linearity ("Into a Gunnysack and Into the Kootenay River") all ebb and flow throughout the session. Only on "Annapurna" does Melford unveil her harmonium, invoking atonal minimalism more than Asiatic tradition. The only non-improvised piece on the album, the traditional "Kailash," closes the record on a sumptuous lyrical note.

Not exactly jazz in a conservatively traditional sense, this is freely improvised music played with heartfelt passion and soulful exuberance. Ripe with possibilities for further examination, Heart Mountain sounds like the beginning of a long and fruitful partnership.

Visit Myra Melford and Tanya Kalmanovitch on the web.