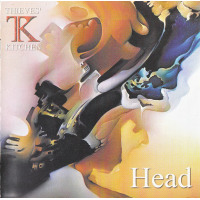 Thieves' Kitchen is Mark Robotham on electrical skins, Simon Boys lead vox of great angst, Phil Mercy is mean and riff-heavy axe, Wolfgang Kindl on superb keys and last but not least is Paul Beecham on bass and backing vox. Five songs range from 7:15 to 11:00 offering hard-hitting prog with a full-voiced impact.

"Time" features a superb synth/keys/vibes-voiced intro. Mean crunch-axe is back with keys painting a wall-of-sound canvas, organically-grown mellotronic delights. Vox is again angst-heavy in Echolyn mode. This is a driving tune — set the cruise control to 75-80 mph. Mercy's axe screams beautifully full of sustain and clean attacks. What soul! Vibes-synth carry things along all the while Mercy rips it and then mutate into monster organ bellowings. Bass and drums are finessed and berserk. Beecham's harmonic vox expands Boys' range.

"The Return of the Ultragravy" . . . mellotrons, shades of S.F.F. and early Crimson the king. Yeah buddy. Power chords, courtesy of Mercy, raze all neo-prog, weenie-rock, tinny-towers. No pansy-prog here! Vox is still introspectively dark like Echolyn just noticed a lost record deal or something equally crushing. Discipline fans take note of these goodies too. By now most listeners have to realize this band KICKS butt. Enjoy the whirling time-sig changes. Nice.

"Integrity" slows things down a bit. But I begin to notice something . . . this cut, tho' 9:10, is the track that TK needs to push for radio play. It's hook-laden, a treasure trove of catchy moments. Though it mirrors much of all that has preceded it leans essentially mainstream in places. Send this to a college/internet DJ now!

Final cut, "T.A.N.U.S." weighs in at a hefty 19:30 opening with a "tribute" to Floyd's DSOTM — clocks ticking, alarms, etc. Well . . . by now all instruments and vocals have firmly fallen into a whole-album gestalt. There is more angst, cynicism, yada-yada, "Life's a drag" and here we go again in a musically affected ennui. "T.A.N.U.S." is the big finish, the amen, the extended benediction — a song yes yet it is one long reprise of "Mute." Musicianship is top-notch but composition-wise we have but many echoes of what has come and gone. For symphonic proggers wanting a crunchingly tasty, monumental suite, Head 's five-song release will satisfy. It is more a five-part tour de force of solid rockin' prog with lyrics of persistent pessimism.

Head is a commentary on that sad state of affairs we accept as "life." Most of us lunkheads plod through, oblivious, shrugging tired shoulders, and say, "Hey, ya wanna rent a movie tonite?" Head complains blatantly, loudly, and with obvious forethought and talent. Strong work guys. Do it again. (Sorry for the delayed applause.)