Deanna Witkowski: Having To Ask

By Joel Roberts
February 1, 2000
Sign in to view read count 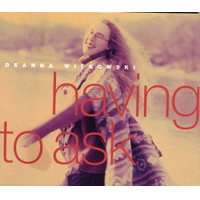 Don't confuse Deanna Witkowski's youthful exuberance for lack of musical erudition. On her spirited debut album, Having to Ask , the twenty-something pianist/singer/composer exhibits a wide-ranging musical knowledge that belies her tender years.

Nearly everything Witkowski does has a strong Afro/Caribbean taste, reflecting her study with Cuban pianists like Chucho Valdes and time spent in Africa. She even turns a Charlie Parker blues ("Au Privave") into a salsa number. Her original compositions, like the opening "Happening at Once" and the title cut, are complex and colorful, with a catchy, contemporary feel.

Her hushed, Chet Baker-style vocals are featured on a handful of cuts, mostly in the form of wordless scatting along with the melody —a practice that could be annoying, but in Witkowski's quiet, unobtrusive delivery, is quite effective. She also turns in an impressive performance at the piano. A highlight is her stirring solo recital of the ballad, "Blame It On My Youth" (an appropriate choice for the young artist), rendered with subtlety, grace and consummate skill. Backed by a talented small ensemble (trio plus saxophone and Latin percussion), Witkowski makes a sparkling debut.