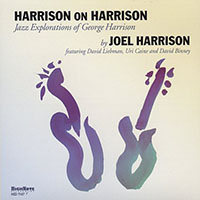 In response to the question "Why continue to retread the Great American Songbook?," some offer the excuse that contemporary pop music doesn't hold the musical interest that pop songs from the Great American Songbook did in their day. But original reimaginings of music by contemporary songsmiths like Beck, Bjork, and Radiohead by Herbie Hancock, Brad Mehldau, and Dave Douglas, among others, have laid waste to that claim. It's a given that the harmonic approach and rhythmic pulse of contemporary pop music differ from those of songs from decades past. But a good song is a good song, a memorable melody a memorable melody—and there's nothing inherently weak about the compositional skills of the distinctive writers who are defining the best in pop music today. They're just different.

And that's a truth that Joel Harrison clearly understands. On previous albums he's tackled gospel music as well as songs by country singer Johnny Cash, folk icon Woody Guthrie, and others. For Harrison on Harrison the guitarist/vocalist pays tribute to the late Beatle George Harrison, proving that nothing is immutable, and that even songs from the collective subconscious are completely malleable and capable of inspiring all manner of reshaping.

Like Hancock's version of Don Henley's "New York Minute" on The New Standard (Verve, 1995), Harrison opens his new disc with a version of "Here Comes the Sun" that takes the tune as far as it can go. Starting with only the opening four notes of the familiar melody and, later, the arpeggio that ends each chorus, he transforms the tune into a searing modal workout that's liberally explored by pianist Uri Caine and, with typical expressionistic fire, saxophonist David Liebman.

The Indian-inspired "Within You Without You" may have been the odd man out when it appeared on the Beatles' classic Sgt. Pepper's Lonely Hearts Club Band (Capitol, 1967), but here Harrison demonstrates the song's true worth in a hypnotic and, again, modal reading that showcases his evocative slide guitar work. The instrumentation is different and the approach less dense, but drummer Dan Weiss blends an elastic rhythmic approach with his own understanding of the Indian tradition—check out his own Tintal Drum set Solo—and there's more than a passing reference to some of Miles Davis' late-1960s/early-1970s work.

Other interpretations are more faithful. The beauty of "While My Guitar Gently Weeps" remains intact, but this version avoids the melodrama of the original. Weiss and bassist Stephan Crump swing "The Art of Dying," supporting Harrison's gritty vocal and Caine's unfettered Rhodes work. The folksy reading of "All Things Must Pass," featuring guest vocalist Jen Chapin, ultimately transforms into an out-of-the-box alto solo by the ever-inventive David Binney.

George Harrison may have been the "quiet Beatle," but his body of work speaks for itself. Joel Harrison's Harrison on Harrison proves that there's more than enough meat on the bones of his contemporary pop music to give interpreters plenty to work with.

Here Comes the Sun; Within You Without You; While My Guitar Gently Weeps; The Art of Dying; My Father's House; All Things Must Pass; Taxman; My Sweet Lord; Love to You; Beware of Darkness; Isn't It a Pity.