By Jack Bowers
December 1, 2002
Sign in to view read count 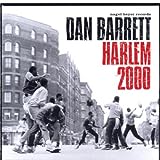 Leader Dan Barrett’s name was the only one familiar to me on this new Nagel-Heyer release (although I seem to have heard the name John Smith before). Not to worry; Barrett’s companions are as bright-eyed and wholly in tune with the nuances of his mainstream point of view as anyone could want. Apart from three songs with “Harlem” in the title there doesn’t seem to be much connection to that particular area of New York City, but the album needed a name and I suppose Harlem 2000 is as good as any. The music is certainly akin to what one might have experienced during a visit to Harlem (or many other populous area of the country) during the glory years of the Swing Era — and can still enjoy in a more contemporary setting thanks to labels such as Nagel-Heyer, Arbors and a handful of others. Barrett, who’s among the best at what he does (which in this case includes playing fabulous trombone and cornet and adding a first-rate vocal on Benny Carter’s “Synthetic Love”), can’t afford to look over his shoulder when soloing, as everyone else is no more than half a step behind and rapidly closing ground. Pianist Chris Hopkins, who wrote the liner notes, downplays his own role, which is nonetheless essential, from supervising the group’s splendid rhythm section to soloing with awareness and intelligence and contributing a handsome original composition, “Dreamy Mood.” John Smith (there’s that name again) is showcased on soprano sax on “It’s Been So Long” (in a trio setting with Hopkins and drummer Oliver Mewes), clarinetist Engelbert Wrobel on Barney Bigard’s “A Lull at Dawn,” Hopkins (with Wrobel and Mewes) on “Body and Soul,” Mewes on Lionel Hampton / Charlie Christian’s “Haven’t Named It Yet.” Wrobel also plays tenor sax (think Harry Allen) on “Solid Old Man,” “Drop Me Off in Harlem” and Barrett’s “Harlem Sundown,” Smith alto sax on “Four or Five Times,” “Angel’s Idea,” “I May Be Wrong” and Teddy Wilson’s “B-Flat Swing.” As for Barrett, he stays busy with enterprising cornet solos on seven numbers, trombone on five others including a muted / open master class on Ellington’s “Echoes of Harlem.” Bassist Christian Ramond adds nimble statements on “Haven’t Named It” and “Drop Me Off,” while Mewes takes a Krupa-like chorus on the jaunty opener, “Beyond the Blue Horizon” (a great but seldom-heard tune written in the ’30s by singer Margaret Whiting’s father, Richard Whiting) and Hopkins comps and solos superbly on every number. This realm of Jazz isn’t called “swing” without cause, and Barrett’s sextet swings freely and often throughout this sparkling and invariably persuasive session.

Beyond The Blue Horizon; Four Or Five Times; Dreamy Mood; It