By JOHN EYLES
February 5, 2020
Sign in to view read count 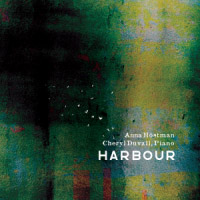 When the Another Timbre label issued the ten albums of its Canadian Composers Series in two batches in 2017-18, including releases by Linda Catlin Smith, Cassandra Miller and Lance Austin Olsen among others, the reaction of some Canadians was that the genie had been let out of the bottle and more Canadian composers were sure to follow those in the series. At the time, Another Timbre proprietor Simon Reynell wrote, " I could happily produce another ten CDs covering music by composers such as André Cormier, Daryl Jamieson, Michael Oesterle, Barbara Monk Feldman, Daniel Brandes, Allison Cameron, Rudolf Komorous, Anna Höstman, Mathieu Ruhlmann, Christopher Reiche, Nick Storring, Eldritch Priest, Jason Doell, Mark Hannesson...the list could go on." Since then, rather than a flood there has been a steady trickle, as exemplified by several Mark Hannesson albums on Edition Wandelweiser such as the fine Music for Guitar. Now comes Harbour, recorded at Glenn Gould Studio, Toronto, in May 2019, the first album credited to composer Anna Höstman and pianist Cheryl Duvall. With six Höstman compositions dating back to 2010, the album makes it clear that the composer is no newcomer; in fact, from 2005-8 she was composer-in-residence of the Victoria Symphony Orchestra, and now teaches composition at the University of Victoria, an institution with links to several of Another Timbre's chosen composers. Harbour's 2015 title track (see YouTube, below), which was commissioned by Duvall, is the centrepiece of the album, accounting for twenty-six of its seventy-eight minutes. The piece is a clear, eloquent demonstration of Höstman's strengths as a composer; it owes no immediately obvious debt to other composers or schools and, throughout, it is unhurried and tranquil, evolving steadily at its own pace, with its own irrefutable logic; Höstman is not afraid to use repetition when appropriate but she never overuses it. Despite its duration, the piece feels the right length for what it has to say, never seeming padded or truncated, a comment which is true of every track here. At the other end of the scale from "Harbour," "Late Winter (for the left hand)" is under four-and-a-half minutes long but, in that time, it creatively explores the constraint of the title's parenthesis, leading to an enthralling piece, not just a technical exercise. Of course, as well as Höstman, some of the above comments reflect well on Duvall and her performances. The composer and pianist obviously have faith and trust in one another. Throughout the album, Duvall sounds relaxed, authoritative and comfortable playing Höstman's music. Overall, this album's six tracks cannot be faulted and point to a bright future for Höstman and Duvall, together as a team or individually.