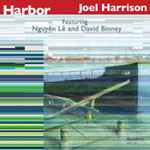 Since his 2003 breakout Free Country (ACT), Joel Harrison has focused largely on liberal and highly unliteral takes of traditional songs, popular country tunes and, on Harrison on Harrison (HighNote, 2005), the music of the late George Harrison.

Harbor represents a couple of significant departures from Harrison's recent recorded work. First, it's a return to all-original composition. Second, while it reunites the guitarist with altoist David Binney (a constant companion since Free Country), it's a first and very inspired meeting with guitarist Nguyên Lê, percussionist Jamey Haddad and bassist Gildas Bocle, who flesh out the group for six of Harbor's eight tracks.

Harrison is loath to consider musical compartmentalization, even when it refers to the commingling of culturally and stylistically diverse sources. There are countless reference points to be found on Harbor including African rhythms, Indian and Middle Eastern linearity, jazz harmony, hints of electronica, modern classical and flat-out fusion. What's most remarkable, however, is Harrison's ability to integrate, rendering irrelevant the identification of his sources in lieu of compositions that range from edgy angularity to sheer beauty, and from through-composition still rife for interpretation to more clearly open- ended vehicles for improvisation.

Lêis the perfect foil for Harrison. Both are capable of spontaneous melodism, jagged skronking and broader textural development, but in complementary ways that occupy such mutually exclusive space that differentiation is never an issue (though, for the most part, Lê is heard on the left channel, Harrison on the right).

Lês ability to suggest oriental microtonality on tracks like the episodic "You Bring the Rain" only makes for more vivid contrast with Harrison, who brings a piece of the Mississippi Delta to "Blue Ghosts of Bourbon Street." The latter evolves through a series of shifts in pulse thanks to Haddad's uncanny polyrhythmic approach, ultimately heading north towards a Midwestern vibe. Haddad, who seamlessly moves from kit to hand percussion, is Harbor's secret weapon—a percussionist with the broadest possible frame of reference necessary to further open up Harrison's already expansive writing.

The benefit of not being burdened with the responsibilities of leader, writer and producer means that Binney is able to focus completely on playing, His Carnatic-centric solo on "You Bring the Rain" is an early highlight, while his powerful work on the more chaotic "End Time" a later one.

Harbor's two middle tracks feature—Binney aside—an entirely different group. While eschewing delineated solos, the atmospheric "The Refugee" demonstrates how expression and interaction can still be used to build the almost relentless repetition of a simple theme to a dramatic climax before releasing into a softer coda.

That the playing on Harbor is uniformly outstanding is a given. What makes it an early contender for one of 2007's best is Harrison's emergence as a writer who entirely dispenses with boundaries and, instead, creates his own pan-cultural and multi-stylistic mélange that's as timeless as it is thoroughly modern.