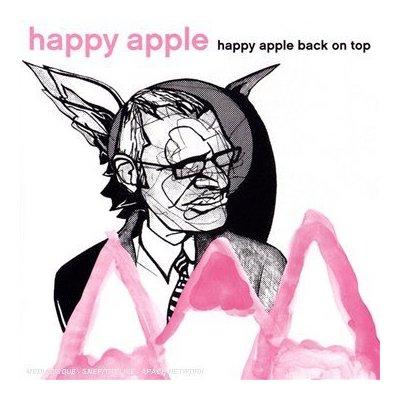 Before becoming synonymous with self-indulgent excess—or worse, smoothed-out pap—fusion offered the excitement of joining jazz improvisation and harmonic sophistication with rock energy and driving rhythms. Though they may not self-identify with fusion, a growing number of musicians raised on both rock and jazz feel no compunction in drawing influences from and blending both. One such group is the Minneapolis trio Happy Apple: saxophonist (and occasional keyboardist) Michael Lewis, electric bassist Erik Fratzke and drummer Dave King, better known for genre-tweaking with The Bad Plus. On their seventh CD, they mine a seemingly inexhaustible vein of grooves to support their catchy themes.

"The New Bison" exemplifies the rhythmic inventiveness they employ to vary the musical feel. Its funky bass intro supports a bluesy tenor and then speeds up before stopping short and shifting into a mellower, melodic bridge with a peppy beat. A syncopated Latin-esque groove buttresses "Lefse Los Cubanos," as the bass emphasizes the upbeats and the sax alternates between linear and swirling movement. King also drives "Calgon for Hetfield" with offbeat accents and drum colors against Fratzke's drawn-out notes.

Beyond chops displays, King's frenetic drumming often acts as quasi-melodic counterpoint to the saxophone. After throbbing bass opens "Hence the Turtleneck," the tempo haltingly accelerates, segueing into a tighter ensemble section where the drum fills offer commentary and response to the unfurling sax lines. The slowly-building "Most Popular to Succeed" gains momentum over nine minutes with dexterous drum and saxophone exchanges. Fratzke acts as the spine, providing shape and context. He stretches out on "1996 A.D.," a tune that begins with a Blue Note organ-trio groove then morphs into a speed-walking gait for his embellishments.

Happy Apple posits that in casting off the baggage of labels, jazz and rock can be fused for sincere, adventurous results.