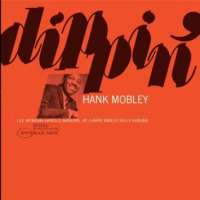 1965 was an interesting year musically, and Hank Mobley's Dippin' tries—mostly successfully—to capture all of it. It's a hodgepodge of styles that were very popular that year, ranging from soul to pop, hard bop to bossa nova.

It's a fun listen—but don't expect any kind of consistent feel.

The record pairs two of the standard-bearers of 1960s Blue Note soul-jazz: Mobley on tenor sax and Lee Morgan on trumpet. While you can enjoy Dippin' without knowing a thing about the 1965 music scene, the album makes even more sense when you consider what came immediately before it.

Just one year earlier, Morgan himself released arguably the best and most popular soul-jazz record ever, The Sidewinder. Both the album and the single of the same name were hits. Dippin' is very much the son of Sidewinder. The opening track, "The Dip," is a happy, infectious bit of soul-jazz with great solos by Mobley, Morgan and funky pianist Harold Mabern.

But wait, that's only the start of Mobley's hitting the 1965 music trends.

The next cut is "Recado Bossa Nova," a tune that obviously trades on the popular bossa nova trend of the early and mid-1960s. Just three years earlier, Stan Getz started the fad with his hit album Jazz Samba, and continued the trend with the albums Big Band Bossa Nova, Jazz Samba Encore, Getz/Gilberto and Getz/Almeida. "Recado Bossa Nova" is more of the same—catchy and maybe a little cheesy, but a happy little toe-tapper.

By 1965, hard bop—Blue Note's bread and butter since the 1950s—was on the decline, but it wasn't gone just yet. The third cut, "The Break Through," has Mobley and Morgan plowing head-first into the old Blue Note hard bop vein. It's marvelous.

But wait... there's one more mid-1960s musical trend to tap. Cut No. 4, "The Vamp," is the very epitome of modern jazz. The opening theme, with its jarring, staccato theme, sounds like it could have been written by Thelonious Monk, who was very popular in the 1960s. It also sounds like it could have been recorded in the 1980s or '90s as part of a modern jazz CD. So just when you think Dippin' is a soul-jazz album, or a bossa nova album, or a hard bop album, it changes into something else. Mobley and Morgan are covering all the bases.

The last two cuts are anticlimactic. "I See a Face Before Me" is a pleasant but not memorable balled (almost every Blue Note album had to have a ballad) and "Ballin" is another hard bop piece, with nice solos again by Mobley, Morgan and Mabern.

All in all, Dippin' is a wonderful record that hits all the musical tropes of 1965. It's diverse, and that's a good thing. Just a few years later, hard bop, the bossa nova and soul-jazz would be old hat. But for this one record, at least, they all come together nicely.