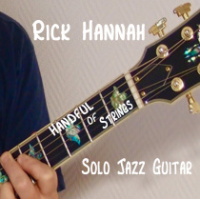 The guitar is a deceptively simple instrument to play, as any teenager who learns the basic strumming chords, and then tries to go beyond that, in any style, will tell you. It hints at being self-contained, that the player can accompany himself. Contrapuntally however, the piano, which allows two independent hands, dwarfs the guitar, even in the realm of the Classical guitar.

In jazz, the guitar has played the varied roles of being part of the rhythm section (epitomized by Freddie Green with Count Basie) as well as lead instrument supported rhythmically by others (early examples are Django Reinhardt and Charlie Christian). Unaccompanied jazz guitar is still a rarity, due mostly to the difficulty in providing harmonic and rhythmic accompaniment while playing the lead. Much has to be done by implication, and success involves blending the two physically contradictory roles.

The acknowledged master of this form is Joe Pass whose series of Virtuoso albums set the bar at seeming impossible height. However, guitarist Rick Hannah takes up the challenge, and with Handful Of Strings, shows us how it is done. Born in Philadelphia, learning his trade in the States and Europe before ultimately settling in Strasbourg, France in 2005, Hannah has put together a set of mostly well-known standards, two original compositions and one overdubbing (Fats Waller's "Handful of Strings"), where he ends up sounding like a stride piano.

Hannah's rather dry tone further exposes him, giving him virtually nothing to hide behind. Technically, Hannah mostly sticks with a pick (rather than pick plus fingers), which makes his chordal interjections strummed. The mix of pure line playing, melody with accompaniment, walking bass and chordal melody playing always varies and what is going to happen next is many times surprising. What the tune is, and where Hannah is in the tune is never is question, although the harmonies can get quite altered.

This is a master at work. "Misty," one of longest tracks, is particularly interesting. The first time through the tune, it is given a rubato melodic fragment/chord treatment, with some lines spinning out between phrases. The second time swings more and so everything is more charged and denser in order to keep the feel of the beat, even when a solo line is played. The last repetition returns to the rubato feel but is more intricate than the opening chorus; simply wonderful.

"Blues in G" is a bit of a surprise with its opening lick, but then Hannah takes the standard blues form and scale far afield at times, without, however, ever losing touch with the blues itself. "Rick's Opus (3)" is played finger style with a lot of finger-on-string sound coming through; it echoes a Classic guitar etude by someone like Fernando Sor. Another surprise tune is Keith Jarrett's "Lucky Southern," which is also played finger style, but is not as overtly contrapuntal as Hannah's original. The difference in the chord fills using thumb and fingers versus a pick is very clear.

The set ends with the barn-burner "Sweet Georgia Brown" which, having a very clear melodic and harmonic structure, allows Hannah to have a lot of fun; it is easy to see his hands flying around the fingerboard.

It Could Happen To You; Nice Work If You Can Get It; Alice In Wonderland; I'll Remember April; Hymne a l'Amour; Four Brothers; Misty; "Two Handfuls of Strings (Handful of Strings); Rick's Opus (3); Lucky Southern; Blues in G; Don't Get Around Much Anymore; Autumn In New York; Put On A Happy Face; Sweet Georgia Brown.