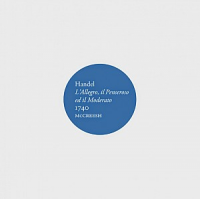 George Frideric Handel (1685—1759) was a bit of a larger-than- life character whose music, and its importance, could stand a bit of Reason, that period between the 1620s and the 1780s when the social, cultural and intellectual tides in Western Europe highlighted reason, analysis, and individualism rather than traditional power structures, e.g., the church. Handel live a good deal of his life in London as a naturalized citizen. Handel had (Johann Sebastian) Bach and (Domenico) Scarlatti (all three born the same year) as musical peers and Kant, Voltaire, and Newton as intellectual cohorts.

Handel tore up the London soundscape with his many Italian Operas. When that craze played out, he turned his pen to English language oratorios from which his most famous, and long-lasting work, Messiah emerged. The oratorio is described as a large musical composition, typically for orchestra, choir, and soloists. It is like opera in that an oratorio includes a choir, soloists, an ensemble, various distinguishable characters, and arias. However, opera is musical theatre, where a story is staged and performed, while the oratorio is only a concert piece—though oratorios (sans the acting and plot components). In an oratorio there is generally little or no interaction between the characters, and no props or costumes. Of significant difference between the two is the subject matter each are based on.

Handel composed some 25 oratorios, the majority of which were staged after 1739-40. The lion's share of these derived their subjects from Scripture. L'Allegro, il Peneroso ed il Moderato is one of the few based on other sources, specifically the poetry of John Milton. Handel had previously addressed the poetry of English poet John Dryden in Alexander's Feast (1736) and St. Cecilia Ode (1739). In 1737, poet John Milton was being honored with a monument in Westminster Abbey. Milton had always been the rage and Handel had been offered librettos based on Paradise Lost for which he declined to add music. However, Handel did take an interest in two other Milton poems (L'Allegro and il Penseroso, both published 1645).

Having mention'd to Mr. Handel your schemes of Allegro & Peneroso, I have made him impatient to see it in due form & to set it immediately."

Jennens also revealed to Harris that he had offered:

"Handel a collection from scripture, which is more my own tast[e] & (by his own confession) to his too; but I believe he will not set it this year, being desirous to please the Town with something of a gayer turn."

This "collection from Scripture" is the written mention of Jennens' libretto for Messiah, written two years later.

The libretto to L'Allegro, il Peneroso ed il Moderato turned out to be a concerted effort between Handel, Jennens, and Harris, with Jennens providing, the il Moderato portion, based on Milton's At a Solemn Musick at handel's request. The music was composed between January 19 and February 4, 1740 and had it premier on February 27th of the same year at Theatre in Lincoln's Inn Fields, London. There have been some notable recordings of the oratorio, including John Eliot Gardiner (Erato, 1992), Robert King (Hyperion, 1999), and John Nelson (Erato, 2000).

Paul McCreesh and the Gabrieli Consort and Players enter the fray with their recording of L'Allegro, il Peneroso ed il Moderato, McCreesh's first Handel recording in 12 years (after Saul (Arkiv, 2004)). McCreesh recorded an excellent Messiah (Arkiv, 1997) that served as Grammophone Magazine's pick for performances until ti was surplanted by John Butts fine account (Linn, 2006). McCreesh treats Handel with crisp respect, scrubbing the scores of all romantic notions, leaving only a clean, Baroque shine.

McCreesh's L'Allegro, il Peneroso ed il Moderato sports two stars in soprano Gillian Webster and treble Laurence Kilsby. Kilsby is a bit of a force for nature in the same vein as Franco Fagioli (as a countertenor). Kilsby's voice is near perfect on this recording. Tenor Jeremy Ovenden is also excellent throughout. The Gabrieli Players are captured with a digital warmth only achieved in the last decade of recording. This period instrument ensemble is certainly comparable to John Eliot Gardiner's fine Monteverdi Orchestra. McCreesh follows Handel's earliest performance version and includes two Concerto Grossi, Op. ^ (Nos. 1 and 3) and the Organ Concerto, Op. 7, No. 1 for a thoroughly entertaining treatment of this Handel Lesser god.