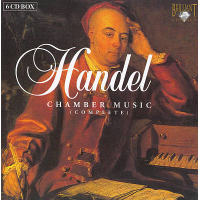 It would be Romantic if it weren't so Baroque...

The revered Italian keyboard master decided to take in a salon costume party while visiting Venice on his most recent concert tour. All attendees were appropriately masked, including one imposing figure seated at the harpsichord, playing. Listening to the performer for a moment, the Master, Domenico Scarlatti, remarked, Che può essere solo una delle due persone che giocano, il caro Sassone o il diavolo. ("That can be only one of two people playing: the dear Saxon or the Devil himself").

During an eight-month period in 1685, three titans of Baroque music were born: Georg Frederic Handel on February 23rd, Johann Sebastian Bach on March 21st, and Domenico Scarlatti on October 26th. While all keyboard proficient (which may be an unforgivable understatement, it was Bach and Scarlatti who left their indelible mark on the keyboard repertoire, with Handel's mark less pronounced. But il caro Sassone did produce a bit of solo keyboard music, quite a bit of it very good. While Bach and Handel never met, Scarlatti and Handel met several times, going head-to-head on one occasion at the behest of their mutual friend Cardinal Pietro Ottoboni, who hosted weekly meetings of the Accademie Poetico-Musicali in Rome, where the Cardinal invited prominent musicians of the day to perform.

It was at just such a soiree that Scarlatti met Handel. When the two met, in 1708, they were both twenty-three years old, and were chided by the Cardinal into keyboard competition with Ottoboni being the judge. Once completed, the Cardinal judged the two equal on the harpsichord, but giving Handel the edge in playing the organ. The two musicians remained friends.

All of this introduction to state the obvious, Handel's published keyboard output pales in comparison to either Scarlatti or Bach. Handel spent the better part of the 20th Century being the one-hit wonder who composed Messiah. Great as that accomplishment was, and, indeed, had this been all Handel composed, his place in history would have been secured. But Handel was a master of many musical things, keyboards not being the lease of them.

Primarily an opera composer, Handel took little care in the formal publishing of this keyboard compositions and was not motivated to do so until 1719, when a pirated edition of several of his keyboard compositions was published with no royalty to the composer. Ever the businessman, Handel assembled his "eight great suites" into a single edition, having John Cluer published them in 1720. These eight suites, HWV 426-433, have since been established as the anchor of Handel's keyboard composing repertoire. Handel produced a second volume of keyboard works in 1733, again reflecting the composer's lack of care. That said, Handel did get his keyboard affairs in order, making this current collection possible.

Preferring to hear these pieces performed on the modern piano, I found these original harpsichord performances of equal enjoyment. Loreggian and Borgestede both possess an impressive early music pedigree as reflected in their accurate and dedicated playing here. The plus to this set is both its completeness and its sonic brilliance. If one can call the harpsichord sound "lush," then, this is it. These performances reveal Handel as every bit the keyboard composer as Bach had he been so inclined to specialize in it. There is both a restless mirth and uncertain darkness in Handel's keyboard music that is captured faithfully here. Tired of Messiah? Try these.