By Ian Patterson
December 7, 2017
Sign in to view read count 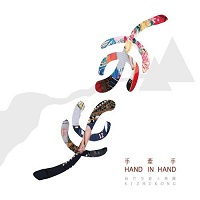 For fans of Taiwanese jazz-folk fusioneers Sizhukong it's been a long wait for the follow-up to Spin (Sony Music, 2012.) The band, formed in 2005 by pianist/composer Yuwen Peng, could never stand accused of rushing its releases but that's not a bad thing when the music produced is of a consistently high quality. In the intervening years Sizhukong has toured internationally, changed record label and personnel, but essentially, its musical identity, on this, its fourth recording, remains largely the same, that's to say, Taiwanese/Chinese folk reimagined through a jazz prism and spiced with World Music flavors.

Peng's tongue-twister in Hakka dialect brings a quirky quality to—and bookends—"Mr. Lo Sells His Goose," though it's her electric keyboard funk on a heavy grooving slower passage, however, that takes the tune by the scruff of the neck, with Lin's drums responding to, and ratcheting up, the mounting tension. Huang's xioa (recorder) and Chen's ruan dovetail on the folkloric "The Lost Necklace," which shifts back and forth between bucolic reverie and dancing gait.

Sizhukong has always embraced fun and celebration in its music as a jazzed-up take on the folk tune "Jasmine," with its sunny vibe and bouncing rhythm—like a Taiwanese soundtrack to Sesame Street—the festive "Busy God," with dancing suona (double-reed oboe) and explosive crash cymbals, and the Latin-infused "Mambo No.7" all attest. The other side of the coin, however, presents a band of more earnest intent, as on the mesmerizing "Rain in the Forest"; here, seductive melody, striking ensemble orchestration and bravura individual improvisation—notably from Huang on dizi and from Lin, who unleashes a sparky drum solo over a collective vamp—is Sizhukong at its best—elegant yet visceral and utterly distinctive.

Guest vocalists Kaolo and Sheng-Xiang Lin sing in their respective Amis and Hakka tongues on "The Gleaners," another upbeat Latin-tinged tune that pays homage to the harvesters, of grain and, with Chen stretching out on liuqin (lute), to the harvesters of music alike.

Hand in Hand is a fine addition to Sizhukong's discography, a one-of-a-kind band that continues to plot a very singular course.

Rice Paddy at Dawn; Sing if You're Drunk; Mr. Lo Sells His Goose; The Lost Necklace; Hand in Hand; Jasmine; Rain in the Forest; Busy God; Mambo No. 7; The Gleaners.