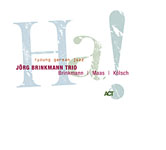 Uncommon instruments in jazz have become, well, more common. Instruments normally considered exotic are finding their way into music that's often distanced from their conventional comfort zones. Uncommon groupings are also becoming more commonplace, with traditional rhythm sections by no means obsolete, but no longer essential. Jörg Brinkmann isn't the first cellist to operate in the jazz sphere—the instrument possesses a lengthy history with the music, dating as far back as Fred Katz in the '50s. But, teaming up with pianist Oliver Maas and percussionist Dirk-Peter Kölsch, he's created a debut teeming with ideas and a multifaceted stylistic approach.

All of which could make Ha! a fine, but unfocused album ranging from the freely improvised "Intermezzo" miniatures to tunes that are as informed by Radiohead and Sigur Rós as they are more traditional sources. But what makes Ha! work so well—in addition to its appealing cross-pollination of straight-ahead jazz, contemporary classicism, hints of fusion, ambient music and more—is the careful sequencing of these 18 originals into a 52-minute travelogue that may make a number of detours along the way, but ultimately ends up an unexpectedly cohesive trip.

With all but five tracks weighing in at under four minutes, Ha! trades extended improvisational workouts for concise statements that blend with detailed writing, largely from Brinkmann and Maas, that can be deceptively simple (the spare, dark-hued "Sirius B") or knotty and complex (the fusion-esque "Klassentreff," which also features some of Kölsch's most unusual found objects).

The trio is ethereal on "Sputnik 68," where Brinkmann's outré bowed harmonics create other-worldly textures before closing with long, low-end pizzicato notes that abruptly segue into the cinematic "Intermezzo 5," a reprise of the longer, waltz-time "Hühner-Walzer." But it's also direct and powerful. "Live in Hamburg" possesses a surprisingly full sound, with Maas' overdriven Rhodes, Kölsch's firm backbeat trading for more orchestral playing during some metrically challenging passages, and Brinkmann comfortably assuming the roll of bassist with the kind of groove that would be unexpected from a classically trained cellist, were it not for his extensive, genre-rich résumé.

Brinkmann packs a lot into a small footprint; despite the brevity of most of the material, the content quotient is high. Still, there's never a sense that the trio is trying to accomplish, perhaps, too much. Instead, "September" (at seven minutes, the disc's longest piece) cogently travels from the Philip Glass-like minimalism of Brinkmann's solo intro to its poignant, brush-driven melodic center and a solo section where Brinkmann deftly juxtaposes impressionistic abstraction with overt and deep lyricism.

Part of ACT's Young German Jazz series, Ha! asserts a growing European viewpoint that the jazz tradition is but one aspect of contemporary improvised music. It introduces yet another young group unafraid of bringing a wealth of musical interests together in the pursuit of something that couldn't have happened without what came before, but avoids unnecessary dwelling—moving forward, instead, with confidence and a clear sense of purpose.