By DAN BILAWSKY
August 4, 2014
Sign in to view read count 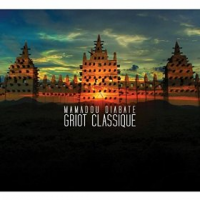 The kora—a West African harp with twenty-one strings and a gourd resonator—is more than an instrument when placed in the hands of a master like Mamadou Diabate; it's a means for storytelling, a tool for expression, a uniting musical force, and a historical repository.

Over the course of his previous albums, Diabate has managed to broaden the scope of the kora's language and associations while remaining true to its traditions. He incorporated the blues and Bambara music with traditional Malian sounds on his debut—Tunga (Alula, 2000); he united Malian and Indian musicians, creating a unique cultural hybrid on Strings Tradition (Felmnay, 2008); and he took the instrument on a more modern journey with Courage (World Village, 2011). With each of his albums, Diabate manages to further his own skills while expanding the kora's musical role in myriad ways. Here, he does it again, going it alone and delivering one vibrant performance after another.

Diabate's awe-inspiring virtuosity as a solo performer first came to light on his second album—the Grammy-nominated Behmanka (World Village, 2005). But it was the Grammy-winning Douga Mansa (World Village, 2008) that significantly raised his profile. On both of those albums, Diabate focused on traditional music with personalized inflections, spinning stories and telling tales through his playing. That, after all, is the very nature of griots—West African artist-storytellers that maintain an oral history of their people through their work. Here, the scales don't tip as far to the traditional side as in the past, but the balance is still there. Diabate spins his own yarns, touches on contemporary modes of expression, and visits some Malian classics ("Nahcouma"). His virtuosic approach to the instrument, serving simultaneously as accompanist and soloist, allows him to create a steady flow of thought. He builds hook-laden passages interspersed with cascading runs, creates gently flowing episodes, and consistently radiates joy.

Jason Richmond, who co-produced the album with Diabate and released the record on his own imprint, also deserves a good deal of credit; he presents Diabate's kora with stunning clarity, allowing the musical wisdom of this griot to shine through.