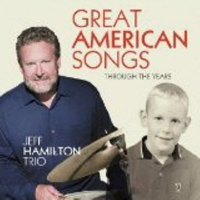 In a sonic climate full of studio fixes, it's always refreshing to hear something real—especially when it's executed with this level of excellence. At this point the Jeff Hamilton Trio has been together for over a decade, and it shows in their relaxed and seamless interplay. On this CD, a limited reissue of a 2013 Japanese release, the trio gives new life to ten classics from the American songbook, showing the fine bone structure that made each tune a classic in the first place.

Pianist Tamir Hendelman is increasingly known for stellar arrangements that put a fresh spin on the familiar. For example, one standout track here is "Thou Swell," a song with a staid Quaker lineage that is not usually rendered as a burner. But leader/drummer Jeff Hamilton had the initial inspiration of using "partido alto," that joyful and complex Brazilian rhythm, and the result is delightful and surprising, complete with signature Hamilton solo. Aside from his impeccable time and swing, he is arguably the world's most musical drummer.

"Someone To Watch Over Me" becomes a feature for bassist Christoph Luty, which includes his thoughtful meditation on the verse and some luscious arco on the melody. "You Took Advantage of Me" sparkles with humor; "I Thought About You" is a lazy blues that still manages to swing. Another highlight is the short and definitive "All Or Nothing At All," propelled by Hendelman's blistering solo.

All told, "Great American Songs Through The years" is simply that: nearly 53 minutes of timeless music, polished to a lustrous sheen.

Falling in Love with Love; Tenderly; The More I See You; It Could Happen to You; Someone to Watch Over Me; Thou Swell; You Took Advantage of Me; I Thought About You; All or Nothing at All; How Long Has This Been Going On.