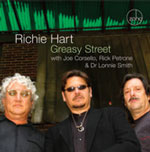 Guitarist Richie Hart wisely works the intersection of two thoroughfares. I'm referring to the aptly titled Greasy Street as well as the more mainstream, and less funkified, Easy Street for the purposes of this album.

Like last season's Blues in the Alley, Hart and his trio with bassist Rick Petrone and drummer Joe Corsello are accompanied by guests to provide a variety of musical textures. This trio has been intact since 2002; Petrone and Corsello have travelled many musical miles together, dating back to the early 1980s as two thirds of the Joyce DiCamillo Trio in Connecticut. The DiCamillo Trio recorded three albums in the 1990s. As I recall, Petrone was also an Air Personality and Program Director on WJAZ in Stamford, Connecticut, a 24-hour jazz radio station during the 1980s.

Keyboardist Pete Levin has been recruited as a keyboardist on six tracks, while Sonny Rollins' trombonist Clifford Anderson appears on the title tune. In order to assure a healthy dollop of grease, Dr. Lonnie Smith, the Turbanator, works the pedals of the Hammond B-3, and hard-blowing tenor saxophonist Jerry Weldon also joins in on three tunes.

For the sake of categorization, there are two sides of Richie Hart on this album. On several tracks, like the Gus Khan standard, "I'll See You In My Dreams," Coltrane's "Naima," and Lalo Schifrin's "Down Here on the Ground," largely in a trio setting, Hart applies his very Wes Montgomery-ish thumb to playing both soulful and mellow. On the title tune, a version of Larry Young's "Tyrone," and the Hart original "East Coast Blues," a grits 'n' gravy approach is guaranteed per the presence of Smith and Weldon.

To further keep listeners on their musical toes, Richie Hart also takes some liberties with tunes. "Frim Fram Sauce," normally taken at a slower pace and with emphasis on the lyrics, is speeded up to mid-tempo and presented as a swing tune with Pete Levin on organ. "Naima," normally a ballad, is given a semi-bossa treatment in mid-tempo and conversely, Ron Carter's "Third Plane," which became part of the VSOP songbook, is slowed down here. Hart's guitar work is very reminiscent of the late Wes Montgomery, recalling not only the famed guitarist's early trio with Melvin Rhyne on organ, but also the subsequent work of guitarists Melvin Sparks and Jimmy Ponder.

All in all, this album provides a lot to listen to!