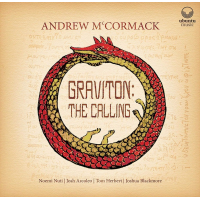 Following in the wake of Andrew McCormack's Graviton (Jazz Village, 2017) comes Graviton: The Calling. All Graviton's personnel have changed save for McCormack and Robin Mullarkey, who plays bass guitar on three tracks. The most notable new recruit is Italian-American vocalist Noemi Nuti, who is also a trained harpist.

The portentous opener, "Uroboros," gives way to the limpid strains of "Walled Garden," the first track to feature Nuti, whose wordless vocals are paired in unison with Josh Arcoleo's tenor saxophone. The title track is the first of the set to feature Nuti's lyrics, which interact with the staccato rhythm of the song. The echoey, transcendence of "Magic Mentor" is hotly pursued by the mesmeric hissing of "Crossing The Threshold."

"The King Is Blind" is an out-and-out prog fest, Nuti here delivering her own words with forceful bluesy singing. On "Belly Of The Whale," McCormack's searching piano solo is sandwiched between slices of darkly foreboding soundscapes. "Dragon," weighing-in at nearly ten minutes and the longest track on the album, is complex, featuring polyrhythms vocal pyrotechnics from Nuti. The final number, the languorous "Returning," includes Nuti's elegiac words, executed in her delightful voice.

This disc loosely qualifies as a "concept album" inasmuch as it is based on a classic hero's journey. In his sleeve notes, McCormack reveals that Erich Neuman's book The Origins And History Of Consciousness speaks about the Uroboros as the first stage of the creation myth. As if to reinforce this symbolism, the Uroboros is depicted on the CD cover as a serpent eating its own tail. Whilst enhanced by Nuti's pellucid voice, it's McCormack's strong compositions that seal the deal, making this an album packed full of enchanting delights.

Uroboros; Walled Garden; The Calling; Magic Mentor; Crossing The Threshold; The King Is Blind; Fork In The Road; Belly Of The Whale; Dragon; Returning.