By Doug Collette
December 25, 2021
Sign in to view read count 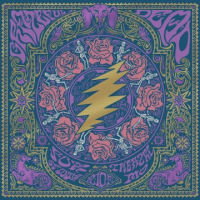 A cull from Listen to the River: St. Louis '71-'72-73 (Rhino, 2021), a twenty-disc box of Grateful Dead live recordings, Fox Theatre, St. Louis , MO 12/10/71 was prepared and configured like an exclusive standalone title. Headed by chief keeper of the vault, David Lemieux, the team of curators lavish a level of creativity and attention to detail upon this package that is a direct reflection of the musical skills these psychedelic warriors exhibit within this three-CD set.

The expertise extends all the way from the subdued yet intricate outside art by Liane Plant (as designed by Rory Wilson in both flat and glossy finishes) to a sixteen-page booklet with a handsome photo array plus (that might well have been expanded in place of some text). At the heart of the release, of course, is the sourcing of tapes recorded by Rex Jackson (partially including long thought lost recordings from a third party), subsequent restoration with speed correction by Plangent Processes, then mastering in HDCD by Jeffrey Norman. There's even a sticker enclosed in the triple-fold package for those who relish such ephemera (though to be fair, that otherwise collectible inclusion has its mercenary angle).

From another artist or label, this set might have "Deluxe" plastered all over it. As is, it is simply designated 'Special Edition," and while both appellations apply, the former is clearly more accurate. Apart from the appeal of its cosmetics, this collection also documents one of the shortest-lived iterations of the Grateful Dead: the band that existed December 1971 through March 1972 was a sextet whose collective inspired musicianship, as captured here in its entirety on this date, is replete with creative power.

From the very inception of Keith Godchaux' stint with the Grateful Dead—he joined in September this same year—his fluid piano work provided a delicious contrast to the precision of Jerry Garcia's electric guitar, and while he remains fairly unobtrusive here, his playing is a staunch underpinning of all the action. Over time, the complementary nature of the two men's playing increased via the regular familiarity of time spent on stage, distinctly invaluable experience put to good use in this setting.

Fox Theatre, St. Louis, 12/10/71 suggests in no uncertain terms that the progression proceeded apace. Playing these recordings at high volume reveals a rough-hewn clarity in keeping with the muscular musicianship, further reaffirmation of how the Grateful Dead were making the most of their transitional state at this point in their career. Having emerged (more or less) from their deepest psychedelic explorations to record the most succinct studio albums of their career—Workingman's Dead (Warner Bros., 1970) and American Beauty (Warner Bros., 1970—these musicians imbued their cover material with as much vigor as their originals. Hear "Big Railroad Blues" for instance or how Garcia's lead guitar slithers around the vocal of Bob Weir on Marty Robbins' "El Paso."

Yet lyricist Robert Hunter's words are one of the greatest virtues of the group's music (albeit one often overlooked except by cognoscenti), indispensable to the ensemble's impact even in this spontaneous setting. Whether married to the titular leader's music for the sake of building upon traditional forms with the likes of "Casey Jones" or conjuring up his own striking images in a tune such as "Tennessee Jed," the poet-laureate of the band provides a road map to the nuanced pacing of a show like this.

Likewise, chipping bluesy harp and understated organ in addition to occasional lead singing, Ron 'Pigpen" McKernan's short and sweet moments in the spotlight on "Mr. Charlie" and "Next Time You See Me," lead directly to that frenetic and emphatic close of the first set. And while recent illnesses left this founding member of the band somewhat short of the gusto with which he once commanded, extended workouts on the Young Rascals' "Good Lovin,'" the psychedelic tinges early in this nineteen-some minutes, reminiscent of so many a "Dark Star," simultaneously transform the performance and reaffirm the continuity in the Dead's evolution.

To some ears, it may be little more than a feint in musicianly adventure, but no more so than "Sugar Magnolia" hints at the ebullient drama of the show's close begun by "Truckin.'" Balancing the seemingly contradictory roles of dance band and practiced improvisationalists (as also afforded by the 50th Anniversary Edition of Grateful Dead (aka Skull & Roses) (Rhino, 2021), contrasts including the juxtaposition of Chuck Berry's "Run Rudolph Run" with "Playing in the Band" no doubt held the attention of the attendees (and listeners of the radio simulcast).

The fragile vulnerability that is both "Brokedown Palace" and "Comes A Time" might otherwise become lost in a less nuanced set list, but the foreshadowing of late set explosives is indicative of the intricacy of Grateful Dead setlists. Appropriately, Nicholas G. Meriweather, the group's archivist at the University of California, postulates aplenty on this topic in his essay contained in this sixteen-page booklet. Oddly though, he overlooks virtually all the instrumental dynamics therein, to wit, the good ol' Grateful Dead are too gentle to brawl and too innately self-disciplined to sprawl.

But intermittently subdued moments throughout are but magnificent set-up to the seven-part segue that precedes the climax. In the final hour of these roughly three here, the band is alternately blazing away, then floating, only to glide on the momentum of the rootsy tribute to roots of "Sitting On Top of the World," then into and through multiple interludes of "The Other One," all of which crystallizes in "Goin' Down the Road Feeling Bad."

This is the Grateful Dead venturing beyond the accepted exercise of dynamic showmanship. In doing so, they are testing as much as rewarding themselves and their audience for their patience and self-restraint for the duration. Of course, time does fly, the playing pervaded by the confidence exuded by the charter members of this rhythm section, bassist Phil Lesh and drummer Bill Kreutzmann, as well as the comparatively new recruit on keyboards.

Grateful Dead history contains its share of moments when the band, at one time or another in all its varied lineups, struggled to find that space where they maximized the potential of the moment(s). But there are also protracted periods where the group was able to not just consistently home in on such territory, but also make the most of their time within it, extending an invitation to their listeners to join them for an experience as transformative as it is transportive. Fox Theatre, St. Louis, 12/10/71 is one of those latter moments.