BY DOUG COLLETTE
December 3, 2016
Sign in to view read count 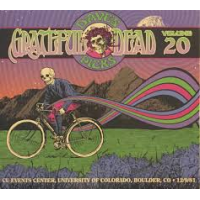 Dave's Pick's Volume 20 marks a milestone in the Grateful Dead's current archive series, its significance not lost on the curator, David Lemieux. Yet rather than indulge in nostalgia in his notes accompanying this set, the man chooses to take the success of the series as further inspiration to carry on, not just with these quarterly releases, but the judicious exhumation of the iconic band's vault in general.

A little over a year after the Grateful Dead began a concerted effort to change things up for themselves and their audience with extended sojourns at the Warfield Theatre in San Francisco and Radio City Music Hall in New York, the group took residence ten-night run from whence this climax comes at the CU Events Center in Boulder. Well on the way to becoming more stylized than spontaneous, the band's comfort with themselves at this juncture in their career didn't preclude more than a little imagination and much of it was centered on keyboardist Brent Mydland, who had joined the band two years prior. Reinvigorating the band all around, not solely with such lucid injections of ideas like the crisp electric piano on the now-well-established slow arrangement of "Friend of the Devil," the comparatively young expatriate from rhythm guitarist Bob Weir's band brought great versatility to his position as a singer of gusto as well as an instrumentalist.

The youngest original member of the Grateful Dead, Weir was inspired to experiment himself as he does with slide guitar on "Little Red Rooster." Here too, Mydland demonstrates his relish for the use of organ, hearkening back to the early days of the band when late singer Ron "Pigpen" McKernan held forth on that instrument as well as harp and by the time yet another staple of the repertoire appears in the form of "Cassidy," the elevated level of camaraderie between Mydland and guitarist/vocalist/composer Jerry Garcia becomes clear; the pinpoint precision of the solos and fills are as admirable as the deftly understated interplay between drummers Bill Kreutzmann and Mickey hart that underscores the balladry of "Looks Like Rain."

Fade-outs and fade-ins from disc to disc on Dave's Picks may be fairly routine but they're hardly predictable in their results. Accordingly, the technique applied from disc one to disc two here heightens the continuity of such complete show recordings as this one and, in turn, magnifies the flow of the Grateful Dead's performance(s). Here consciously crafted to concentrate on songs before heading into improvisational territory with "China Cat Sunflower" on to "Drums/Space," one of the increasingly smooth segues of "Scarlet Begonias"/"Fire on the Mountain" pivots around Mydland's participation. His organ lines, interweave with those from bassist Phil Lesh's own instrument, thereby cushioning that transition, much as it facilitates the further progressions from the overt drama of "The Other One" just prior to the quiet likes of "Stella Blue."

And if he hadn't proved himself invaluable to the band by this point in the evening, Mydland's spirited, soulful singing also mitigates Weir's fevered straining for effect on the formal set closer "Good Lovin'" and the encore coupling of "U.S. Blues" with Rolling Stones 99' "(I Can't Get No) Satisfaction." In his essay within the sixteen-page booklet in the triple-fold digi-pak, director of the Dead archive, Nicholas Meriwether, sagely suggests this pairing was not pure serendipity: as far removed from the cultural mainstream of the Reagan era as were the Grateful Dead at this point their career, they remained keenly aware of what was happening outside and inside their own zeitgeist, a perceptive contrast on full display at the University of Colorado this December night.