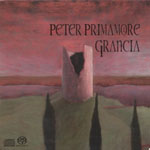 It is not going to be easy to describe this album in a single sentence. Grancia is a classically-influenced work of original material that somehow combines a singular gift for melody along with jazz sensibilities. Pianist/composer Peter Primamore is nominally a musician with a significant background in composing music for television. His wish in preparing for this album was to assemble a group of players that were from both the musical worlds of classical and jazz, with the understanding that the musicians would have to be able to improvise.

The most noteworthy aspect of the finished product is that many of these compositions are quite memorable. For example, a song like "Chatham, named after the upstate New York town, could easily become an Academy Award winner for best musical score if this were part of a film score. It features Primamore, Chieli Minucci playing guitar with the grace of Oscar Castro-Neves and Tony Levin on bass. On other selections, the soaring work of Antoine Silverman on violin; Charles Pillow on any number of reed instruments (oboe, English horn, flute, clarinet) and the multi-reed work of Tim Moran (alto flute, flute, clarinet, bass clarinet) add immeasurably to the respective compositions.

Most of the tracks are large orchestral ensembles with the exception of two duets. "Crossing Over sets Pillow on oboe against the plucked harp of Carol Emanuel, while "Lullaby/Elegy pairs Primamore with Levin. Some of the exceptional melodies include "Windswept," a Brazilian influenced piece that makes the most of guitar, violin and piano, and "The Book of Erin Flowers," which is based upon a possible supernatural experience of Primamore's. The resulting composition is melodic and dramatic.

One track that doesn't work well is a tribute to the Allman Brothers Band. While you might envision "Free Western as a mash-up of classical/jazz/rock, it's the album's one misstep.

Grancia is provided in hybrid SACD format and is an aural treat to hear. Among the other curiosities is that Tony Levin and drummer Jerry Marotta have been singer Peter Gabriel's rhythm section at various times over the years.